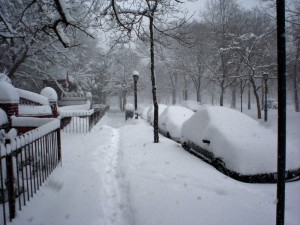 The mammoth storm that stretched from the Great Lakes to the Atlantic dumped more than 3 feet (90 cm) of snow across the Northeast, the National Weather Service said.

Coastal blizzard and flood warnings were in effect, but Massachusetts and Connecticut lifted vehicle travel bans as the storm slowly moved eastward on Saturday afternoon.

“Even the plows are getting stuck,” Harkins told local WTNH television.

The storm centered its fury on Connecticut, Rhode Island and Massachusetts, with the highest snowfall total, 38 inches (97 cm), in Milford, Connecticut.

The storm dumped 29.3 inches (74 cm) of snow on Portland, Maine, breaking a 1979 record, the weather service said. Winds gusted to 83 miles per hour (134 km per hour) at Cuttyhunk, New York, and brought down trees across the region.

An 80-year-old woman was killed by a hit-and-run driver while clearing her driveway, and a 40-year-old man collapsed while shoveling snow. One man, 73, slipped outside his home and was found dead on Saturday, Malloy said.

A Boston fire official said an 11-year-old boy died from carbon monoxide poisoning. He was overcome by fumes as he sat in a running car to keep warm.

In Poughkeepsie, New York, a man in his 70s was struck and killed on a snowy roadway, local media reported.

A 30-year-old motorist in New Hampshire also died when his car went off the road, but the man’s health might have been a factor in the accident, state authorities said.

Even as the big storm’s force was slackening, the National Weather Service forecast a possible blizzard in the Great Plains.

Snow and, in some areas, blizzard conditions were expected across parts of Colorado, Nebraska, North Dakota, Minnesota, South Dakota and Wyoming through the weekend into Monday, it said.


Utility companies reported about 700,000 customers without electricity across nine states as the wet, heavy snow brought down tree branches and power lines.

The Pilgrim Nuclear Power Plant in Plymouth, Massachusetts, lost power and shut down automatically late on Friday, but there was no threat to the public, the Nuclear Regulatory Commission said.

As the storm tapered off, streets in Cambridge, Massachusetts, were largely quiet except for snowblowers and shoveling. Kevin Tierney, 41, struggled with a snowblower to carve out a parking space in more than 2 feet (60 cm) of snow.

“I had this all planned out, and I don’t know who said it, but everybody goes into a boxing match with a plan until they get punched in the mouth,” said Tierney, an attorney.

Massachusetts, Rhode Island, Connecticut, New York and Maine declared states of emergency before the storm. The U.S. Postal Service suspended mail delivery in parts of those five states plus New Hampshire and Vermont.

Although New York was hit by a foot (30 cm) of snow, Fashion Week went on unfazed as crowds arrived to watch the morning’s shows by Ruffian and LaCoste.

Andrea Daney, a digital marketing senior manager for LaCoste, said she was trying to be discreet as she changed from snow boots to high-heeled crushed blue velvet ankle boots.

“I’m calling it the shoe storm of the century,” she said. “You have to make adjustments to your outfit.”

The snow delighted New England’s ski industry after a dry winter that has left green grass visible across much of the region.

Greg Kwasnick, a spokesman for Loon Mountain in Lincoln, New Hampshire, said business was slightly slower than normal on Saturday but likely would pick up in coming days as roads cleared.