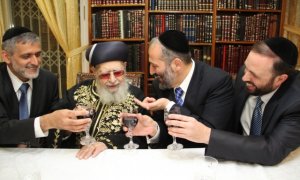 With coalition talks in full swing and electioneering a thing of the past, for now at least, Shas is feeling the impact of running under the leadership of the dynamic trio, Eli Yishai, Aryeh Deri and Ariel Atias. The achdus arrangement may have provided interesting campaign posters, but it does not seem to work when a party is involved in intense coalition negotiations.

It barely succeeded in the elections and it appears the arrangement is deteriorating rapidly amid an increasingly audible call from within the party for the appointment of a single party leader. The three were appointed by Maran HaGaon HaRav Ovadia Yosef Shlita, as the Gadol Hador prefers not insulting Deri or Yishai, both having played pivotal roles in the party’s success over the years.

Shas sources quoted by Walla News explain it is not a working situation “and even Prime Minister Netanyahu does not know with whom he should be speaking”, describing a dysfunctional situation in the party, a party struggling to find a seat at the cabinet table.

Things in Shas are not likely to calm any time soon as in a number of months election campaigns for local elections will get underway, not to mention the elections for new chief rabbis in June 2012.

As Shas seeks to negotiate a deal in the ongoing coalition talks many feel that Likud/Beitenu does not and cannot take the leadership trio seriously, realizing it is time to face the music and appoint one leader. The losers will simply have to accept the reality.

Another rumor floated in recent weeks is that Aryeh Deri is setting his sights on the Jerusalem mayoral election. Deri supporters point a finger of blame at Yishai, explaining he is simply doing what he can to embarrass Deri and compromise his integrity as party leader.