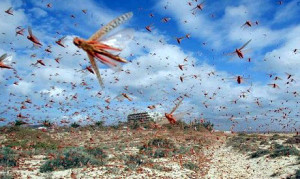 Israeli agriculture officials report on Sunday evening 28 Adar 5773 that another large swarm of locusts making its way to southern Israel is being monitored and aggressive measures are being taken to attack them with pesticides in the hope of containing them before they begin eating crops and causing significant losses to farmers. Channel 10 News reports the swarm is in the tens of millions.

Crop dusting planes spraying pesticides are reportedly operating over Egypt in cooperation with officials in that country as experts on both sides of the border are carefully monitoring the situation with growing concern. Efforts are also underway in Israel as the unwanted pests have already begun attacking area olive orchards and experts report the entire area crop is in danger of being destroyed.