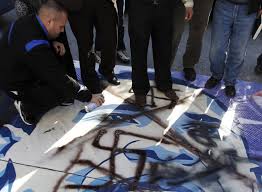 Residents of PA (Palestinian Authority) occupied Beit Lechem on Monday 7 Nissan 5773 showed their true colors, their disdain for both Israel and the United States ahead of Wednesday’s scheduled arrival in Jerusalem of US President Barak Obama.

A banner with a picture of the US leader was torn down and spray painted with swastikas as vehicles drove over it and finally, setting it ablaze. Israeli and American flags were also burned to drive the point home.

While President Obama is in Israel for a 48-hour visit, he will meet in Ramallah with PA Chairman Mahmoud Abbas (Abu Mazen) as he tries to jumpstart the failed effort known as the Oslo Peace Process. The White House does not have high expectations regarding the diplomatic process between Israel and the PA, but a follow-up visit by Secretary of State John Kerry is planned during which Israel will be pressured into making additional concessions to the PA towards placating Abu Mazen in the hope he will agree to renew talks.

The visit appears to be a genuine White House effort to set a different tone for President Obama’s second term, shifting away from the strained relations seen with Prime Minister Binyamin Netanyahu during his first four years in office. This was highlighted to some degree in last week’s Israel Channel 2 News interview in the White House given to correspondent Yonit Levy in which Mr. Obama referred to the prime minister as “Bibi” numerous times.