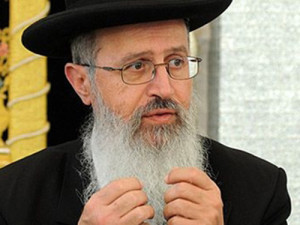 As events continue to develop in the election for new chief rabbis of Israel, it now appears quite likely that Shas will push the candidacy of Holon Chief Rabbi Avraham Yosef.

The Ministerial Legislative Committee voted to approve increasing the voting body for the chief rabbis of Israel from the current 150 people to 200, as expected, including at least 20% women. The change is expected to easily pass in Knesset. This will have a significant outcome on the upcoming election for new chief rabbis. The date of that election has yet to be set.

Most believe the new voter body will work to the benefit of Rabbi David Stav, who heads the Tzohar Rabbonim organization and serves as the chief rabbis of Shoham. While Rabbi Yaakov Ariel, chief rabbi of Ramat Gan is a prominent candidate for the post of Ashkenazi chief rabbis, it appears that Rabbi Stav is in the lead and the new reality will work to his favor. However, Rabbi Stav has stated that if Rabbi Ariel officially announces his candidacy he will withdraw from the race. Rabbi Ariel is also the posek for the Tzohar organization.

The issues surrounding the race for the chief rabbis are complicated and it now appears that Maran HaGaon HaRav Ovadia Yosef Shlita will not support a deal that would assist in the election of Rav Ariel, even at the cost of Rishon L’Tzion HaGaon HaRav Shlomo Moshe Amar not serving a second term. As such, Rabbi Avraham Yosef, chief rabbi of Holon and a son to Chacham Ovadia is viewed as the primary candidate as the next chief Sephardi rabbi for unlike with Rabbi Ariel, he is only 64 so he qualifies to run without amending the maximum age ceiling.