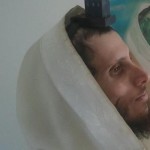 The identity of the Shomron terror victim from earlier Tuesday morning 20 Iyar 5773 is now cleared for release. Murdered in the morning attack at Tapuach Junction was Yitzhar resident Evyatar Borovsky (בורובסקי) HY”D, 31, married and the father of five.

Borovsky was born in Kfar Chassidim. He was employed as a member of the Yitzhar security team by the Nof Yam Company. He also worked in theater as an actor.

The Attack:
Evyatar was waiting at a Tapuach Junction bus stop in the direction of Jerusalem. An Arab male armed with a knife managed to stab him in his chest three times and then grab his pistol and fired a single shot at him.

Border police opposite the bus stop realized immediately what was taking place and he fired at the terrorist. The terrorist returned fire. One policeman and an officer ran after the terrorist, neutralizing him.

The terrorist, who was recently released from an Israeli prison after serving a sentence for rock-throwing is a resident of Sweqa in the Tulkarem district. He remains in Beilinson Hospital in Petach Tikvah in moderate condition.

The levaya is scheduled for 18:00 in Kfar Chassidim.