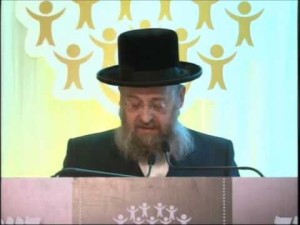 [VIDEO IN EXTENDED ARTICLE] Despite three banquet rooms at Ateres Chaya Hall in Boro Park being filled to capacity with over 5,500 people for the Bonei Olam dinner Tuesday evening, one could hear a pin drop as Bonei Olam President Rabbi Schlomo Bochner made a surprise announcement.

With tears in his eyes, Rabbi Bochner deeply thanked Eli Ostreicher of Regal Wings and several other online ventures for donating the astronomical sum of half a million dollars. Reb Eli and Shabsi Gross were the two Nedivas Halev awardees at the dinner.

Rabbi Bochner explained that Mr. Ostreicher refused to have this donation announced in public, but after much back and forth via email, Rabbi Bochner finally convinced him that this will not only inspire others, but will also do so much good for this wonderful and holy cause, which is thus far responsible for the lives of over 4,000 infants.

The dinner and a three-volume journal paid tribute to Bonei Olam’s eight branches across North America and Eretz Yisroel, which has helped frum mishpachos across the globe.