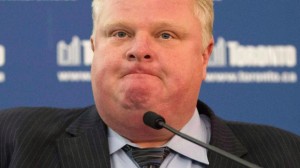 Security ushered policy advisor Brian Johnston out of city hall around midday on Thursday, and he told reporters he had resigned. Kia Nejatian, the mayor’s executive assistant, also left his job, the city confirmed in a statement sent to local media.

The 44-year-old mayor, who hails from a conservative political family and was elected to lead Toronto in 2010, has lost five staffers in seven days, including his chief of staff, who was fired, and his press secretary.

A defiant Ford told a crush of reporters gathered outside his office that “everything is going fine,” said he was bringing in new staff and vowed to weather the political storm.

“I’m not stepping aside,” Ford said. “I’m running in the next election, and if the great people of this city want to go in a different direction that’s what their prerogative is, but I guarantee, my name will be on the ballot.”

He repeatedly refused to answer questions on Thursday about the alleged video, shrugging them off with a refrain of “anything else?”

U.S. media outlet Gawker and the Toronto Star both reported on May 16 that their reporters had seen a cellphone video that appears to show Ford using crack cocaine. Ford has repeatedly denied the allegations.

Reuters cannot confirm the existence of the video or its content.

Separately, Ontario Liberal Premier Kathleen Wynne told reporters that the Canadian province’s government was monitoring the situation and could get involved, if appropriate.

“As a citizen and as premier of the province, I’m concerned that things are not as they should be at city hall,” she said. “It’s hard to imagine that it could be business as usual.”

The comments, unusual coming from a sitting provincial leader, prompted a sharp response from Ford’s older brother, who is a Toronto city councillor.

“Get your house in order before you have the nerve to say anything about the mayor,” Doug Ford told reporters at city hall. “We have this city in great financial shape. It’s in better shape than what we inherited.”

Rob Ford has sparred with Wynne’s office over how to fund a massive regional transit expansion, stating that a sales tax hike and gas levy would hurt “hardworking families” in Ontario.

Mayor Ford has enjoyed a hard core of support from a segment of Toronto voters, particularly in the suburbs, who lifted him to power on a platform of controlling spending and cutting taxes, along the lines of the populist Tea Party movement in the United States.