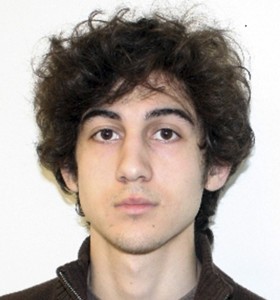 The remaining suspect in the Boston Marathon bombings has recovered enough to walk and assured his parents in a phone conversation that he and his slain brother were innocent, their mother told The Associated Press on Thursday.

Meanwhile, the father of a Chechen immigrant killed in Florida while being interrogated by the FBI about his ties to the slain brother maintained that the U.S. agents killed his son “execution-style.”

Dzhokhar Tsarnaev, 19, walked without a wheelchair to speak to his mother last week for the first and only phone conversation they have had since he has been in custody, Zubeidat Tsarnaeva told the AP.

In a rare glimpse at Dzhokhar Tsarnaev’s state of mind, he told her he was getting better and that he had a very good doctor, but was struggling to understand what happened, she said.

“He didn’t hold back his emotions either, as if he were screaming to the whole world: What is this? What’s happening?,” she said.

The April 15 bombings killed three people and wounded more than 260. Elder brother, 26-year-old Tamerlan Tsarnaev, was killed in a shootout with police, and Dzhokhar remains in a prison hospital after being badly wounded.

“I could just feel that he was being driven crazy by the unfairness that happened to us, that they killed our innocent Tamerlan,” their mother said, standing by the family’s insistence that their children are innocent.

The Tsarnaevs met the AP in their new apartment in a 14-story building in a well-to-do area of Makhachkala, the capital of the restive Caucasus province of Dagestan. The apartment had no furniture apart from a TV, a few rugs, and wallpaper materials lying on the floor.

Anzor Tsarnaev, the suspects’ father, said they bought it for Tamerlan, his wife, and their young daughter in the expectation that they would move to Makhachkala later this year. He added that they planned to turn their old home in a dingy district on the outskirts of town into a dentist’s office, so that Dzhokhar, a dental hygiene student, could work out of it after completing his studies.

“All I can do is pray to God and hope that one day fairness will win out, our children will be cleared, and we will at least get Dzhokhar back, crippled, but at least alive,” Tsarnaev said.

Separately, at a news conference in Moscow, the father of a 27-year-old mixed martial arts fighter who was killed during FBI questioning accused agents of being “bandits” who executed his son.

Abdul-Baki Todashev showed journalists 16 photographs that he said were of his son, Ibragim, in a Florida morgue. He said his son had six gunshot wounds to his torso and one to the back of his head and the pictures were taken by his son’s friend, Khusen Taramov.

It was not immediately possible to authenticate the photographs.

The FBI says Todashev was being questioned by an FBI agent and two Massachusetts state troopers about his ties to Tamerlan Tsarnaev, as well as about a 2011 triple slaying in Massachusetts.

Three law enforcement officials said initially that Ibragim Todashev had lunged at the FBI agent with a knife, although two of them later said it was no longer clear what had happened.

The father said his son was “100 percent unarmed.”

Taramov confirmed Thursday that he had taken some pictures of Ibragim Todashev’s body at an Orlando funeral home and sent them to the father. He said Ibragim Todashev had a decorative sword with a broken handle, but that it was not a weapon.

“The sword wouldn’t cut nothing,” Tamarov said. “I played with it many times. It wasn’t sharp from any angle. It would do the same harm as a piece of wood.”

The father said Taramov told him that U.S. agents interrogated him on the street while five officials interrogated Todashev in his Florida house for eight hours on May 22, the night he was shot.

Todashev’s father said that his son moved to the U.S. in 2008 on a study exchange program and met Tsarnaev at a boxing gym in Boston in 2011, about a year before he moved to Orlando. He said the two were “not particularly close friends.”

Prior to last month’s bombings, Todashev underwent an operation for a sports injury and was on crutches, making it physically impossible for him to have been involved in the bombings, his father said. He added that Todashev had recently received a green card and was planning to return to Chechnya for the summer last Friday, two days after he was killed.

The father said he and his brother were interviewed at the U.S. Embassy in Moscow on Thursday as they sought a visa to take his son’s body back to Chechnya.

FBI agents interrogated the younger Todashev twice before the night he was shot, his father said. He said his son told him that he thought Tsarnaev had been set up to take the blame for the bombings.

“I’d only seen and heard things like that in the movies — they shoot somebody and then a shot in the head to make sure,” Todashev said.

The FBI wouldn’t comment on the claims made by Todashev’s father.

The Tsarnaevs’ parents have held fast to their belief that their sons were framed. Zubeidat Tsarnaeva, dressed all in black and still visibly distressed, showed AP several YouTube videos on an iPad she claimed cleared her sons. They could not be authenticated by the AP.

“I remember when our cat was sick, Tamerlan was sick himself for two days afterward, because he was so worried about her,” Tsarnaeva said.

She said Tamerlan told her about Todashev, and that she and her husband had invited him to visit them in Russia, though he never came. Tamerlan later told them that he and Todashev were unlikely to continue training together since they practiced different sports, and he appeared to have lost track of him after Todashev moved to Florida, Tsarnaeva added.