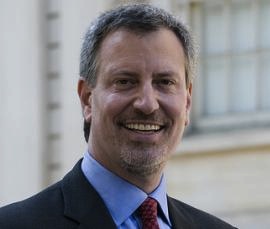 Two threatening letters, one apparently smeared with blood, were mailed during the last week to the New York City office of Bill de Blasio, the city’s public advocate and a Democratic candidate for mayor, New York police said on Thursday.

The letters were written in Spanish, said police, who would not disclose the contents other than to call them “rambling” and to say that the writer claimed they were stained with blood.

Police Commissioner Ray Kelly on Thursday told reporters that de Blasio received “a threatening letter that appeared to have blood on the letter” and a second letter, “apparently from the same person.”

News of the letters came in the same week as ricin-laced letters were sent to New York Mayor Michael Bloomberg and his group Mayors Against Illegal Guns, and a similar envelope was sent to U.S. President Barack Obama.

Police said there was no obvious link between the two sets of letters but said they were continuing to investigate before ruling out that possibility.

The first letter to arrive at de Blasio’s office in the Manhattan Municipal Building came late last week or early this week, and the second, apparently from the same sender, arrived on Thursday, said a New York Police Department spokesman.

No harmful substance was found in either letter in initial tests, police said.

De Blasio is one of a half dozen mainstream candidates seeking to win the Democratic nomination in the contest to succeed Bloomberg, who is scheduled to leave office at the end of the year.

Recent polls put de Blasio roughly at the middle of the pack, which is so far led by City Council Speaker Christine Quinn.