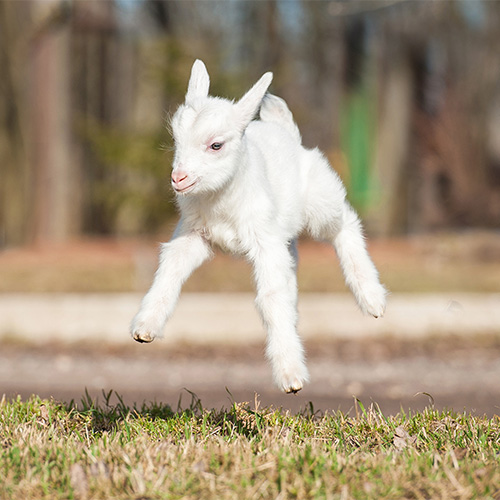 Everyone grew up with it and it signifies the end of the Pesach Seder. Father bought the kid (a sheep or goat) for two zuzim. But the bobcat came and ate the kid. The dog came and bit the bobcat. The stick hit the dog. The fire burned the stick. The water extinguished the fire. The ox drank the water. The slaughterer shechted the ox. The Malach HaMaves slaughtered him. And the Holy One came and slaughtered the Malach HaMaves.

We are all familiar with it, but what does it really mean?

The standard explanation that most of us grew up with was that the nation of Israel was the Gadya, the little sheep and the rest of the stanza refers to the vicissitudes of the exiles that we had experienced. They may be hard to identify but each stanza would refer to one of the great world powers – either the Assyrians, the Babylonians, the Persians, the Greeks, the Romans and more.  That is the first thing we must know.

But there are other explanations too. Indeed, the Chasan Sofer quotes the Tashbatz who says that the reason this was written so enigmatically is so that we would spend time providing explanations to it and we would thus fulfill the Mitzvah of Sipur Yetzias Mitzrayim. That would be the second thing we should know.

Rabbi Yonah Tevlei Bondi of Frankfurt Germany in his Be’er Minyan Hagaddah, a good friend of the Chsam Sofer, however, provides a different explanation of this piut. This would be the third thing we should know.  He identifies it with the Midrash Rabbah in Parshas Noach which relates a conversation between Nimrod and Avrohom Avinu.

Nimrod suggests to Avrohom to worship fire. Avrohom responds that water is more powerful. Nimrod acquiesces but them Avrohom comes back with a suggestion that perhaps he should worship clouds which carry the water. After Nimrod acquiesces, Avrohom changes it to wind which disperses the clouds. Then to man who can withstand the clouds.

The Chad Gadya revisits the same conversation between the Jews and the Mitzrim. In essence, it pokes fun at the idol-worship of the Mitzrim.

The Vilna Gaon (explained in Sefer Lail Shimurim) has the Chad Gadya, Chad Gadya as really two goats – the goats that Yaakov Avinu gave to Yitchzok Avinu, one for the Korban Pesach and one for the Korban Chagiga. D’zabin Abba refers to the blessings that Yaakov obtained, which were given to Yoseph. The bobcat refers to the brothers who were jealous of Yoseph, as it is the nature of cats to be jealous. Ate the bobcat means that they sold him to the Ishmaelites. The dog is Paroh who bit the brothers of Yoseph – he enslaved them. Then came the stick – Moshe Rabbeinu’s stick which punished Paroh. The fire is the yetzer harah for Avodah Zara. It destroyed the stick at the destruction of the Beis HaMikdash which was felled by Avodah Zarah. The water is the  prayers of Knesses Yisroel which overcame the desire for Avodah Zarah. But the ox was Rome that put the nation of Israel into exile. The Shochet is Moshiach Ben Yoseph. But then he will die. But Hashem will ultimately destroy the Malach HaMaves.  This would be the fourth thing to know.

Rabbi Tzvi Hirsch, the Av Beis Din of Horodna (died 1830) in his Zera Gad explanation of the Hagaddah explain that the Chad Gadya is a depiction of the battle between the forces of holiness and those of Tumah. The Gadya depicts the nation of Israel. The father is Hashem. The two zuzim are the two tablets. The bobcat is Mitzrayim. The stick is Moshe who killed the Mitzri. The fire refers to Dosson and Aviram – the evildoers who follow the Yetzer Harah. The water is the angel Gavriel (See Avos D’Rav Nosson chapter 2 where he is referred to as such), who saved Moshe Rabbeinu from the Mitzrim by appearing in his form, allowing Moshe to escape Egypt (see Talmud Yerusalmi, Brachos 9:1 for the narrative, but the name of the Malach is not identified there). The ox refers to the destructive angels that pursued Moshe Rabbeinu to kill him – undoing the power of the water (See Nedarim 32a). The Schochet refers to Tzipporah, Moshe Rabbeinu’s wife who performed the Bris Milah on her son thus negating the power of the destructive angels. The Malach HaMaves tried undoing that by acting as a prosecutor against Moshe Rabbeinu in that he delayed doing the Milah until the angels Michoel and Gavriel came to give testimony on his behalf. And finally, Hashem will undo the power of the Malach HaMaves.  This is the fifth thing to know,

The Yaavetz explains that the entire piut refers to the travails of the Neshama- the soul here on earth and has nothing to do with the exodus from Mitzrayim. The Gadya is the soul. The bobcat is days of youth, where we entertain all sorts of desires, like a bobcat. The dog is the Yetzer Harah which bites the soul in addition to the bobcat. The stick refers to the bad character traits (Midos) that come later as one grows – which further afflict the Neshama. The fire refers to purposeful evil intent which further afflicts the Neshama. The water is hergel or habit which extinguishes the soul. The ox is the Satan which further complains against the soul. The Shochet refers to the destructive angels caused by all of his sins. The Malach haMaves separates the soul from the body. And ultimately, Hashem will punish the Neshama further for all of its sins. This is all, of course, if the person does not follow the path of Hashem and does good and His Will.  This is the sixth thing to know.

And finally, the seventh thing to know:

A wise person once explained that the Chad Gadya was written on many levels. On the one hand it is written in a form that the child would enjoy and be encouraged to stay up until the very end of the Seder, with its remarkable phrases and the tune in which it is sung. On the other hand, it was also written with remarkable insights into the travails of Klal Yisroel, the history of the world unfolding, and the plight of the Neshama.