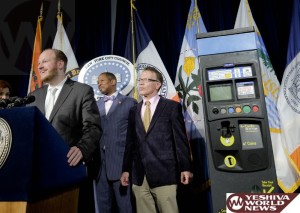 The New York City Council today approved Councilman David G. Greenfield’s legislation to further reform the Muni Meter parking system across the five boroughs. This legislation requires the city Department of Transportation to reprogram its Muni Meters so that drivers can pay for parking up to one hour before the regulation begins and to prevent the machine from accepting money when it is out of receipt paper or after the parking regulation has ended for the day.

The bill was unanimously approved at yesterday’s City Council’s Transportation Committee, leading to today’s vote by the entire Council. It was introduced in the City Council last month and also has the strong support of Speaker Christine Quinn, Transportation Chair James Vacca, and 20 other council members who cosponsored the bill. This legislation represents the latest step Councilman Greenfield and the City Council have taken to reform the Muni Meter system to make it fairer and more convenient for everyone who drives in New York City, and comes directly as a result of complaints the councilman has heard from residents throughout southern Brooklyn.

“I’m proud to lead the fight in New York to end gotcha parking tickets. It is incredibly frustrating for New Yorkers to have to sit in their car until the parking restriction begins in the morning, or to feed the meter only to find out it is out of paper and can’t issue a receipt. This important legislation will help eliminate unfair tickets for drivers and represents an important step towards fixing our parking system,” said Councilman Greenfield.

Meters in Brooklyn, Queens, the Bronx and Staten Island can immediately be reprogramed once Councilman Greenfield’s law takes effect 90 days following today’s City Council vote. Some older meters which do not have the ability to be immediately reprogramed, including the majority of those in Manhattan, are required to meet the new standards within two years of the date the bill is enacted.

Councilman Greenfield has worked hard to resolve some of the flaws that cropped up with the new Muni Meters after the city began replacing single-space meters across the five boroughs several years ago. Previously, the City Council approved legislation Councilman Greenfield co-sponsored to provide a five-minute grace period for drivers while they are paying for parking at a nearby meter, and a law requiring Traffic Enforcement Agents to immediately cancel a ticket if a driver shows a receipt proving they are within the grace period. In addition, Councilman Greenfield co-sponsored and helped pass a law that allows drivers to use any leftover time on their receipt on any other block with the same meter rate.

“We have made great progress so far in our efforts to resolve problems that arose as a result of the shift to the new Muni Meters on behalf of drivers around the city. My thanks to Speaker Quinn, Transportation Chair Vacca and my colleagues for supporting this legislation. I will continue to look for ways to perfect this system using the invaluable input I receive from residents,” added Councilman Greenfield.

Councilman Greenfield has previously spearheaded legislation approved by the City Council that eliminated the city’s use of neon green, impossible to remove stickers to punish drivers who allegedly had violated alternative-side parking regulations. In addition, he has introduced several bills to make owning a car in New York City less frustrating, including a law requiring the city to provide the public with prior notice before creating a temporary tow away zone and legislation requiring the MTA to delineate exactly where each bus stop ends so drivers know where they can legally park.