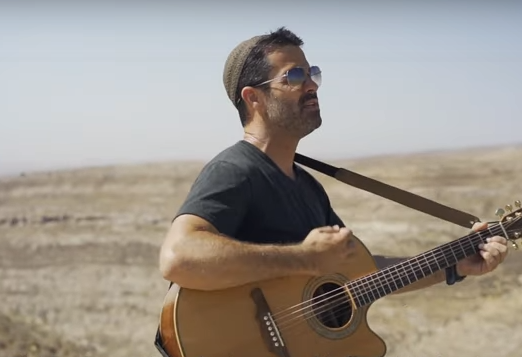 Rabbi Jeremy Gimpel is one of Israeli’s premiere media personalities. He’s the co-founder of The Land of Israel Network, Israel’s #1 Podcast, and a founding partner of The Arugot Farm, a new farm and retreat center in the Judean mountains.

For a $25 tax deductable donation to the Arugot Farm you can download Rabbi Jeremy Gimpel’s full album and book – . The songs of the album Psukei D’Zimra- David’s Vision, are in Hebrew, the book The Ancient Judean Way to Start Your Day, is written in English.

1. You’ve worked in the media and journalism, in education and even gotten your feet wet in politics, what inspired you to write this album?

I never intended to produce a music album. It evolved naturally over a few years. Two things happened simultaneously about 4 years ago. I came to the Arugot Farm, one of the most beautiful places in the world, just when I was going through a bit of a religious crisis. I no longer found meaning going to shul. The boring monotony of it all was crushing my spirit. There was one moment when I looked around in shul and it looked like everyone was mumbling the word “watermelon” over and over again… “watermelon, watermelon, watermelon”. I was done with shul. So I took my guitar that I used to fiddle around with in high school, drove out to the Judean mountains, to the Arugot Farm, with the goal of having a real tefilah from my heart.

The first part of Shacharit (the morning prayers) is called Pesukei D’Zimra (passages of song), not Pesukei D’Mumbling. So for almost 2 years I came to the mountains alone and tried to sing the morning prayers. Slowly melodies came to me that fit the words King David wrote in Tehilim.

Later I found out that The Arugot Farm is located in the mountains of Zif which is the place David escaped to when hiding from King Saul before he became King. According to the Midrash, most of the book of Tehilim was written in those mountains before David became King.

All of a sudden, the Tefilah (prayer) of my music became that much more special to me. Finally, after nearly three years years of playing the guitar, singing to Hashem alone on a mountain, I decided that I wanted to share these songs with the world.  Yet I never expected it to be received with the excitement and enthusiasm which it has been.

2. How has this project changed your as a person?

This whole adventure has been a journey through time and spirit. Just taking the time to connect to the Land of Israel, to connect to the Master of the Universe, to learn how to sing to Hashem, has transformed me forever, nevermind the album. Knowing all these songs are being seen all over the world is exhilarating. After the US and Israel, my music video is watched most in Germany and Japan!

For me, that’s just awesome. One is the heart of the beast, the center of secular anti-semitism. The other, the farthest country both geographically and culturally from Israel. I love the idea that Kind David is still teaching the world how to pray.

As I was in this process, I started to really learn about Tefillah (prayer). I took the Seder Hatefilah (order of prayer) seriously. Prophets and sages created the order, like a map, navigatung us toward an encounter with Hashem. I started looking at the laws of Tefillah more closely.  It’s hard to explain but as my Tefilah became stronger my days became better and I started living more focused, happier, and more productive life. when I started my day with a more purposeful prayer, my days became infinitely richer and more blessed.  I just felt gratitude for Hashem more in my life.

So the next stage was to compile a journal of all my insights into Tefillah, my thoughts on Tehilim and so, “The Ancient Judean Way to Start Your Day” was born.

3. Tell us more about the book.

In this world of confusion and separation, doubts and cynicism, some of the clarity and strength I have found was discovered in moments of praise, gratitude and tefillah. The melodies that emerged in those encounters became the songs in the album and the book is a collection of the insights, tips and tactics I’ve discovered while following the guidance of ancient Israel.

For me,, the most important question became“how do I live my best life?” The question is overwhelming, and the answers and tactics are literally endless. I’ve come to a very simple formula – the key to having a great life is simply having a bunch of great days. The best way to ensure you have a good day, is winning the morning. If you win the morning, you win the day. If you change your days, you change your life.

“Taste and see for the Lord is good.” – Psalm 34:9
This book was written for those who, like me, are hungry not only to learn about prayer but to experientially taste the goodness of Hashem.

4. What are you trying to accomplish with your music videos?

Tefilah is called, Avoda shebalev (a service of the heart). If your heart is not in it, you’re not doing it right. If you don’t feel what you’re saying, you miss it.I guess each video expresses a feeling.

So in my first 2 videos I try to capture what it felt like being all alone in the mountains, singing to God, seeking after Him like a madman singing at the top of my lungs on a mountain top. The ecstasy and awe of it all.

My newest music video, Mode Ani, is made up as a day at the Arugot Farms, waking up with my kids, it’s a song of thanks. I hope it warms people’s hearts and makes them smile, maybe even laugh. It just reminds people of the simple things in life for which we should all be grateful

I’ve been making Jewish video’s since the advent of YouTube. Baruch HaShem, our videos have tens of millions of views and now to combine my movie making skills with music, which is my prayer, is the greatest work I’ve been able to accomplish so far… But I’m just getting started.

I have always had a deep desire to impact the world, and although the music is in Hebrew, I add subtitles with translations and transliterations, so everyone from any background can learn to sing the Pslams of King David in the original language it was expressed.  Seeing the stats on YouTube and receiving feedback that people are downloading my music and book from countries all over the world is really encouraging me.

5. What makes you qualified to be teaching about prayer?

I don’t feel qualified. I’ve learned halacha (Jewish law) and passed some tests, but there’s no Rabbinic training that I’m aware of in prayer, meditation or music.

So I’ve learned Torah about Tefilah, studied the book of Psalms in depth, done research, but mostly I’ve had my own experiences. I’m just trying to share with others the ideas, perspectives and insights that made my prayer experience more meaningful. With that said, almost  everything in the book is backed up by the spiritual giants before our generation and some that B’H are alive today.

As I was working through this process, I consulted quite a bit with my father Dr. Amnon Gimpel, who is a neurologist and psychiatrist and one of Israel’s experts on ADHD.  He said that if the practical meditations, “Kavanot” in Hebrew, are practiced daily while listening to the music of the morning prayers – the brain itself will develop better abilities to focus and organize throughout the day.

Although I don’t think you should pray to cure ADHD, it is a wonderful benefit that the exercise of purposely saying the words of Shacharit, until you feel an emotional response, helps make us more focused, emotionally balanced and productive.

6. What are you hoping for this project?

Life, unlifted, uninspired, and lacking purpose, may not justify that pain that we all inevitably face in one form or another.  The world is broken and everyone we know and love are going to die. And that’s the best case scenario. The first story of the Torah tells us we were expelled from the garden and life is not going to be easy. Without inspiration and a relationship with God, life’s suffering is overwhelming.

The essence of prayer is a song and man cannot live without a song.  With all the challenges of this world, life is a gift. A gift we did nothing to deserve. Prayer reminds us of the gift and points us to the Giver. Prayer is the light that banishes the darkness of this world and reminds us that life is good and we have so much to be grateful for.

Rabbi Shlomo Wexler Z”l, my wife’s grandfather passed away this year at the age of 92 was a big inspiration in my lofe. He was one of the most creative and scholarly rabbis I ever met. His innovative commentary-historical novel on the daughters of Tzlofchad is an absolutel work of brilliance. He lived through the time of the Holocaust, saw the ressurection of the State of Israel and the Six Day War when we liberated Jerusalem. He made Aliyah and saw grandchildren and great grandchilren living and playing in the mountains of Judea. That actually happened in one lifetime. And with the blink of an eye, he’s gone. “Yeshuat Hashem K’heref Ayin”- “Hashem’s salvation will be like the blink of an eye”. This work is in someways a continuation of his work.

In all of Jewish history, we’ve never had it this good. Israel is rising up once again and emerging as a world superpower.  Any Jew from any country can just get on a plane and fly home, quite literally “on the wings of eagles”. The IDF is the mightiest military in the Middle East, Israel’s economy has never been stronger and the shekel is one of the strongest and most stable currencies in the world.

I feel blessed to be living in the Land of Israel in the mountains of Judea. I was given this gift of light and my hopes are to walk in the light and share the light from the Judean Mountains as much and as far as I can.

For a $25 tax deductable donation to the Arugot Farm you can download Rabbi Jeremy Gimpel’s full album and book – https://tickets.israelgives.org/tickets/JeremysNewAlbum. The songs of the album Psukei D’Zimra- David’s Vision, are in Hebrew, the book The Ancient Judean Way to Start Your Day, is written in English.