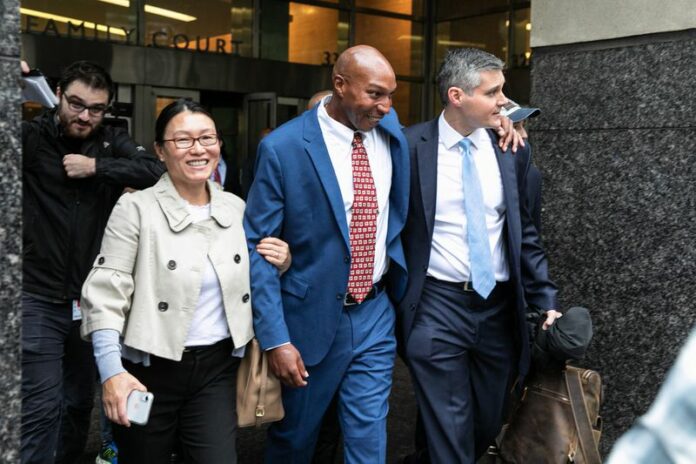 A man who spent over a quarter-century behind bars while professing his innocence in a New York City killing was cleared Thursday after prosecutors said they no longer believe the key witnesses’ testimony.

Carlos Weeks, 46, walked out of a Brooklyn courtroom free for the first time since 1993, when he was arrested in a shootout that killed Frank Davis, 21, and wounded a 10-year-old girl. She was caught in the crossfire between two small groups of men outside a public housing complex.

Davis’ two brothers had been gunned down less than a block away in separate shootings during the prior six years, during a violent era in New York City.

Weeks’ now-dismissed murder and assault convictions hinged on the testimony of two sisters who said they looked out their 12-floor apartment window and saw him shooting.

The identification came shortly after one sister’s son implicated Weeks, telling authorities Weeks had confessed after approaching him at a gas pump. But before Weeks’ 1995 trial, the son killed himself while behind bars in an unrelated case.

The sisters testified only under threat of being detained to be brought to the witness stand, and during a recent reinvestigation, one woman recanted her testimony and her sister said she didn’t remember the shooting at all, prosecutors and Weeks’ lawyers said.

“The two witnesses who identified Mr. Weeks as the shooter were not credible. Accordingly, we cannot stand by this conviction,” Brooklyn District Attorney Eric Gonzalez said in a statement.

There’s no possibility of perjury charges in the case; the legal time clock ran out years ago.

Weeks’ attorneys from the Legal Aid Society and the law firm Davis Polk & Wardwell LLP said they also developed new evidence showing Weeks wasn’t at the scene of the July 1993 shooting and a prosecution eyewitness would have testified to that. The witness was never called to the stand, the lawyers said.

Weeks, who was serving a sentence of 27½ years to life, told authorities he drove up to the scene after the shooting and had no involvement in it.

“This is a happy day for Carlos and his family _ a long time in coming,” Legal Aid Society lawyer Elizabeth Felber said in a statement, while urging Brooklyn prosecutors to move forward on other conviction challenges the society has brought.

A request for comment was sent to a possible email address for Davis’ mother, Frances. He had been her last surviving child, and she said at the time of his death that losing him felt like an unending nightmare.

“I don’t feel like I’m living,” she told The New York Times then. “I can’t believe that I can lose three children through homicide in the same neighborhood.”

The Brooklyn district attorney’s office has reexamined over 100 old cases in the past five years, marking one of the most sweeping conviction-review efforts among prosecutors nationwide.

Weeks’ conviction is the 27th that Brooklyn prosecutors have disavowed. They are standing by 80 other convictions after reinvestigating them, while still reviewing about 80 more.

Some defense lawyers and exoneration advocates have complained that the Conviction Review Unit has moved too slowly in the past couple years.

Gonzalez said Thursday that the unit “will continue this crucial work in an effort to correct every miscarriage of justice that happened in Brooklyn.”