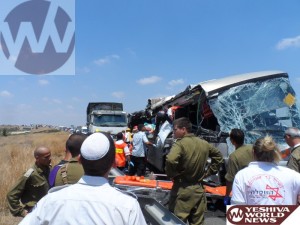 Police accident investigators report that it appears the bus traveling southbound on Highway 6 on Sunday scraped the side of the garbage truck that was stopped off to the side of the highway. Four people were reportedly killed in the accident that left approximately 35 others injured, some seriously.

Police have detained the truck driver, who was uninjured. The bus driver sustained light injuries and will be questioned as well. It appears the bus scrapped the side wall of the stationary garbage truck, causing the bus to flip onto its side.