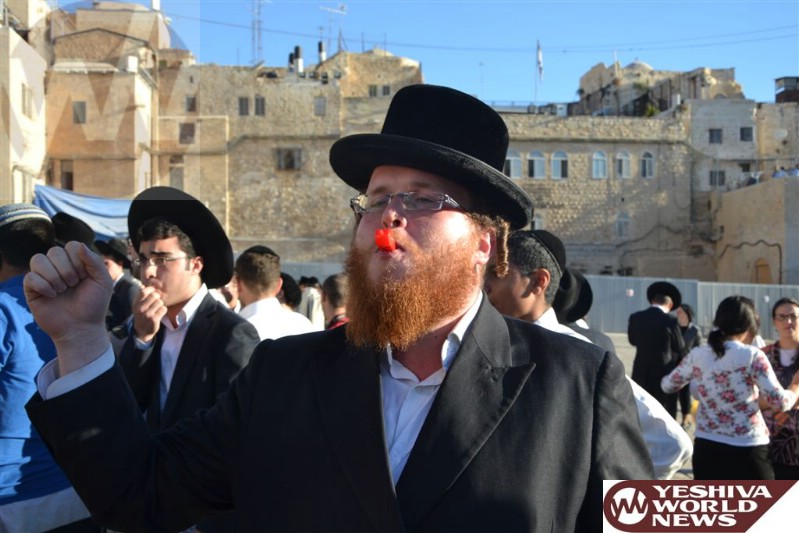 In line with instructions from Gedolei Hador Shlita, thousands of bnos yisrael arrived at the Kosel on Wednesday morning for shachris, 2 Rosh Chodesh Elul 5773. Since the girls are still on vacation, buses arrived from Bnei Brak in addition to Yerushalayim. Due to the large turnout police limited the Women of the Wall (WoW) to the rear section, placing barriers around them to maintain order an avoid confrontation between the groups.

The WoW group arrived at 07:00 and police closed the entrance to the Kosel to permit them to enter peacefully. The shachris minyan at the Kosel in the presence of Kosel Rav Rabbi Shmuel Rabinowitz began before the WoW group got into place. The davening was conducted with the public address system followed by tehillim by Rav Yaakov Addis. This made the WoW service even more difficult to hear for those wishing to participate.

A number of chareidi local and national officials were seen there too, including Meir Porush, Yossi Deutsch and Yitzchak Pindrus. A small group of frum males blew whistles to disturb the WoW service. Police confiscated a number of the whistles.

The WoW group provided live internet stream of their event and despite the increased media coverage, they expressed disappoint and accused police of once again giving in to chareidi pressure.

At the Mughrabi Gate entrance to Har Habayis the dati leumi contingent was informed it would not be permitted onto the Mount and that had to make do with a tefilla service at that location.

Despite concerns of police, all the events passed without any major incidents.