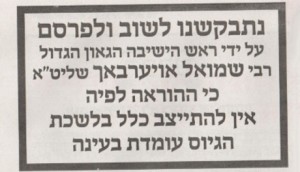 IDF military police on Monday, 6 Elul 5773 arrived in Elad in an effort to apprehend people not reporting to the draft. They were armed with a copy of an ad appearing in HaPeles which says in the name of HaGaon HaRav Shmuel Auerbach, instructing bnei Torah not to report to IDF induction centers.

HaPeles reports that military police came to both Elad and Beit Shemesh, warning young men who have been ordered to appear in an induction center to do so or face arrest. It appears that when Rav Auerbach heard of increased efforts to compel bnei yeshivos to appear at an induction center, he instructed the newspaper to print his notice opposing compliance with such a directive.