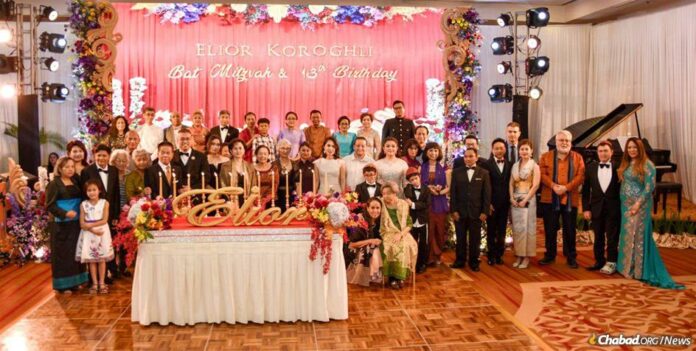 It would be hard to find a more unlikely scenario than a royal Bas Mitzvah in Cambodia, a southeastern Asian county where the official religion is Buddhism. Cambodia, which is a constitutional monarchy, is also one of the few elective monarchies in the world, where the king is not necessarily the heir of the former king but is elected by a council from the pool of candidates with royal blood.

The mother of the Bas Mitzvah girl, Susie Koroghli, was born to Princess Sisowath Neary Bong Nga, the daughter of Sisowath Monivong, the King of Cambodia from 1875 until 1941. Susie was born in Washington D.C., where her father, Thay Sok, was the Cambodian ambassador to the United States. Susie was completely Westernized but was also steeped in Cambodian culture from her Buddhist home.

As a young adult, Susie became friends with Ray, an Iranian Jew who was in the States for college. When Ray told Susie before Rosh Hashana that he wouldn’t be calling her for two days, she was curious and begged him to take her to shul and he reluctantly agreed. Ray and Susie eventually married and moved to Las Vegas where Ray occasionally davened at the Chabad shul of Southern Nevada.

Once, Susie was waiting to meet Ray at shul and she overheard a Torah class which sparked her interest. She went back for more classes and after a long process she eventually became a giyores and she and Ray and their three children are now completely frum Jews.

The Koroghlis are now active and respected members of the frum community in Las Vegas, hosting dozens of guests for Shabbos every week. Their sukkah can hold up to 120 guests and they host 500 guests every year for Purim. In 2018 they were honored by the Yeshivah Day School of Las Vegas.

In December 2019, the Koroghli family made a Bas Mitzvah for their oldest daughter Elior in Las Vegas. But Susie wanted her daughter to be exposed to her royal roots and the family traveled to the capital city of Cambodia, Phnom Phen, for a second celebration in royal style with the Cambodian royal family this past Chanukah.

The Chabad shelichim in Cambodia, Rav Bentzion and Rebbetzin Mashi Butman, took on the huge task of kashering the royal palace’s kitchen and the Koroglis flew in Israeli chef Kobi Mizrachi to prepare the kosher banquet. The grand Bas Mitzvah took place at the Raffles Hotel Le Royal and continued on Shabbos at the Chabad Cambodia Jewish center. A royal honor guard accompanied the Koroghlis as they walked back and forth from shul on Shabbos.

The Koroghli family met with the current King of Cambodia, Susie’s second cousin, and the Queen mother and the Bas Mitzvah celebration was recorded in the Royal Palace Record Book.

“She lights up the room wherever she goes,” Ray said about his wife when asked if she was really a royal princess. “People are just drawn to her and are fascinated by her knowledge of Judaism, as well as her actions. I call her my queen.”