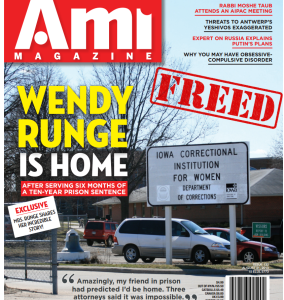 This past Friday, Wendy Runge was released from prison in Iowa. The Jewish mother had been sentenced to a maximum of ten years behind bars; in the end, she was released after six months. Several hours after her shocking release from prison, Mrs. Runge shared her story with Ami Magazine in an essay describing both her ordeal inside the Iowa prison system, where she found her place among the “lifers” and amid scenes of terrible violence and heart-wrenching tragedy, and the dramatic moments in court when she won her freedom.

Despite the sometimes disheartening surroundings, Mrs. Runge gathered the courage to write her own motion for a reconsideration of her sentence. “It took me over a month to convince my husband Pinchas as well as my rav to allow me to do it myself, without an attorney.” At a hearing in front of Judge Arthur Gamble, the chief judge of the county, whom she had previously had a positive encounter with, Mrs. Runge says she found a sympathetic ear. When she mentioned troubles that she’d had postponing an original trial date, Judge Gamble said, “I don’t know what happened with this case…Had I been presiding, things would have been very different.” In the end, she says, the fact that she was being let go, back to her family, was overwhelming. “By that time, I could only weep.”