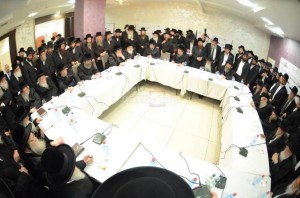 The Moetzas Gedolei Yisrael of Agudas Yisrael convened on Wednesday, 22 Elul 5773 to discuss the government policy decision impacting the chareidi tzibur. The rabbonim shlita are pained and concerned over ongoing efforts to draft bnei torah into the IDF as well as realizing the harsh reality resulting from the significant cuts in funding for yeshivos and avreichim.

They rabbonim released a passionate call to the government. “Dear brothers do not lift a hand against Toras Moshe,” warning what occurs to one who does so. The rabbonim explain that not only should funding for yeshivos not be cut, but it should be increased for we know הבוטח בה’ חסד יסובבנו.

Taking part in the meeting were the Admorim of Gur, Belz, Vishnitz, Sanz, Slonim, Boyan, Biala, Moditz, and Sadigura Shlita. It is reported the Erlau and Seret-Vishnitz Rebbes Shlita are too weak to attend. Also present were a number of Yahadut Hatorah MKs, who presented the situation to the admorim.

The admorim also discussed fundraising abroad towards finding additional funds to keep yeshivos and kollelim running with the realization the cuts levied against the chareidi community are unprecedented in any other sector of Israeli life. The rebbes called upon the tzibur to increase tefilos and limud Torah, the real response to the current situation.