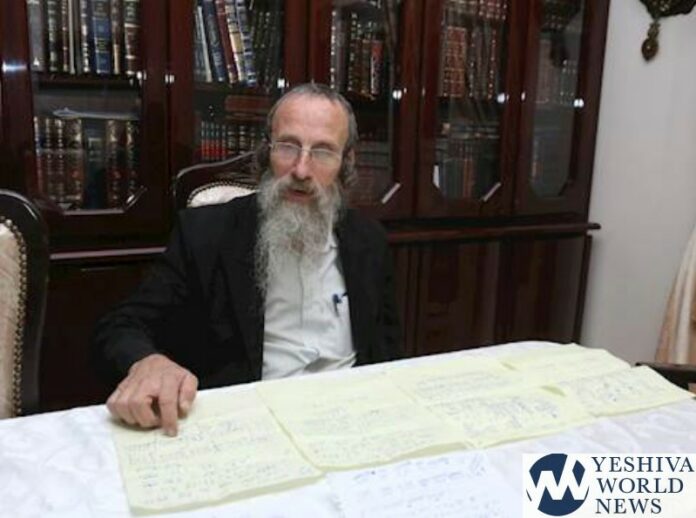 Rav Meir Turnheim, a Chabbad chassid who lives in Lod has successfully predicted the results of past political elections in Israel and throughout the world with great accuracy, basing his predictions on a specific complex method of singling out letters from one passuk in the parsha read in the week of the elections in the section read on the day of the elections. At times, his predictions were proven true despite the fact that all other predictions and polls predicted otherwise.

According to his predictions for the Israeli elections on Monday, Rav Turnheim claims that based on his method, Prime Minister Binyamin Netanyahu will win the elections, as his name is mentioned ten times in the parsha (Parshas Tzevah) and Gantz’s name is not even mentioned once.

“I predict he [Netanyahu] will win,” said Rav Turnheim. “He was mentioned only once [in the previous elections] and this time he’s mentioned ten times.”

Rav Turnheim said that he began delving into this topic due to the fact that he grew up with the truth that everything that happens in the world is written in the Torah and it’s clear that such an important topic [political elections] is also contained within the Torah.

Rav Turnheim told B’Chadrei Chareidim in the past that he does this as a hobby. “As a Yehudi ma’amin, I grew up on the truth that everything is written in the Torah and therefore I searched in the Chumash of the day of the elections before all the elections in Israel for the past 20 years and found the name of the winner clearly identified through singling out letters.”

“Before the 2015 Israeli elections, when it seemed that Netanyahu has no chance whatsoever against the coalition of Tzipi Livni and Yitzchak Herzog, I found in the pessukim that Netanyahu will win.” [Netanyahu won a resounding victory in 2015 despite all predictions that the left would win.]

“My neighbor who works in the media and heard [me saying] this, asked me if I’m prepared to say this publicly. I agreed and broadcast it live on Radio Kol Chai and I was also interviewed by Walla News. It seems like this shita works and according to what was written in the Torah, Netanyahu really did surprise [everyone] and won.”

“Ten months before Trump’s victory, when I saw how crucial these elections were for the world and how much everyone was talking about them, I searched for the election results, and indeed [my] prediction [according to my shita based on the Torah] was proven and Trump won,” Rav Turnheim said. “I was interviewed by several media outlets before the elections. My predictions seemed unrealistic but whatever is written in the Torah ha’kedosha is fulfilled.”

Rav Turnheim also predicted French President Emmanuel Macron’s victory over Marine Le Pen in 2017 and the loss of Dutch politician Geert Wilders in the 2017 elections in the Netherlands.

“There was a Jew that started putting on tefillin after he lost a bet that Clinton will win,” Rav Turnheim said, according to Collive. “He saw that everything is written in the Torah and did teshuvah.”