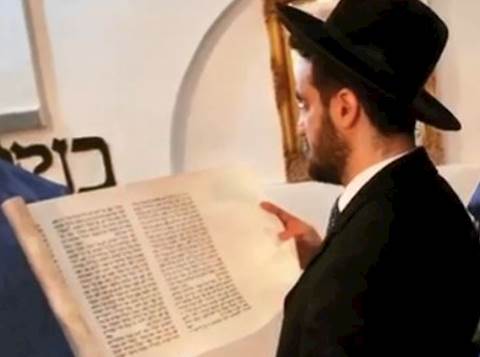 The Rav of Tehran, Rav Yehuda Grami, and a group of Jews traveled to the kever of Mordechai and Esther in the city of Hamedān on Purim night and read the Megillah at the burial site of the Purim story’s protagonists.

The kevarim of Mordechai and Esther have been in the news recently as various media outlets and social media posts have reported that the Basij student organization of the universities in Iran’s Hamedān province threatened to convert the site of the kevarim of Mordechai and Esther into a Palestinian diplomatic mission if the US and Israel implemented even one step of Trump’s “Deal of the Century.”

Some say the reports are groundless as Esther and Mordechai were considered Persian royalty and the Iranian regime preserves the site due to their own interests in maintaining Persian historical and cultural sites.

Iran is currently experiencing one of the world’s worst outbreaks of the coronavirus, with official reports as of Tuesday recording 8,042 infected and 291 dead although the actual figures are widely believed to be much higher, with high-level government officials among the dead and infected.

The hardest-hit province is Tehran, followed by Qom, Mazandaran, Isfahan and Gilan.

In the Khuzestan province, 16 Iranians died from methanol poisoning due to false rumors that drinking alcohol prevents the contraction of the coronavirus.

Health Ministry spokesman Kianoush Jahanpour reported the latest statistics on a televised news conference on Tuesday confirming an 18% increase in deaths from the day before and 12% more confirmed cases.

Iran is the hardest-hit country in the Mideast by the new coronavirus, which sickens but largely doesn’t kill those afflicted. Across the region, there are over 8,600 confirmed cases of the virus.

For most people, the COVID-19 illness caused by the new coronavirus causes only mild or moderate symptoms, such as fever and cough. For some, especially older adults and people with existing health problems, it can cause more severe illness, including pneumonia.

Meanwhile, Lebanon announced a 56-year-old man had died from the coronavirus, marking the first known death in the country, a Health Ministry official said Tuesday. The official said the man had recently returned from Egypt. The official spoke on condition of anonymity because he was not authorized to give official statements.

Lebanon has 41 confirmed cases of the new coronavirus — most of them linked to Iran. At least one patient who returned from Iran has left the hospital after two weeks’ successful treatment.

According to the World Health Organization, people with mild illness recover in about two weeks, while those with more severe illness may take three to six weeks to recover. In mainland China, where the virus first exploded, more than 80,000 people have been diagnosed and more than 58,000 have so far recovered.

Lebanon has been hit by a severe financial and economic crisis since October, particularly after mass protests against the country’s ruling elite broke out in October. But street demonstrations have been minimal since the outbreak of the coronavirus.

Saudi Arabia closed off air and sea travel to 14 countries affected by the new virus Monday, while Israel ordered two weeks of home quarantine for anyone arriving from overseas. The outbreak in Israel has been largely contained, but it has begun to gain pace in recent days, with a total of 55 cases diagnosed as of Tuesday.

On Monday, Mideast stock markets tumbled over fears about the widening outbreak’s effect on the global economy. The drop in the markets came as global oil prices suffered their worst losses since the start of the 1991 Gulf War. Other Mideast markets fell as well as the new coronavirus has affected global energy prices and OPEC failed to make a production cut deal with Russia last week.

Worldwide, there are over 110,000 confirmed cases of the new virus, with more than 3,800 deaths attributed to it. The number of people who have recovered is about 62,000.