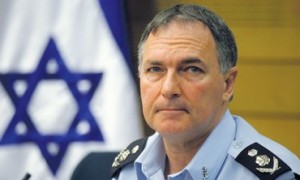 During his Rosh Hashanah toast, Israel Police Chief Yochanan Danino announced that since being appointed chief of the department, he hasn’t had time to learn with Rabbi David Lau, who is now the Chief Ashkenazi Rabbi of Israel.

Taking part in the pre-Rosh Hashanah event at National Police Headquarters was the senior Israel Police command along with Rabbi David Lau and Rishon L’Tzion Rabbi Yitzchak Yosef. During the event Danino turned to Rav Lau and said “we used to learn chavrusa but since my appointment as chief we have not had time. Now that we are both in Yerushalayim we can renew our limud. I really miss the learning” concluded Danino.

Danino was referring to a morning shiur given by Rav Lau when he served as the rav of the city of Modi’in. Danino arrived in Rav Lau’s shul every morning to take part in the daily limud Torah but was forced to stop when he assumed the new post.