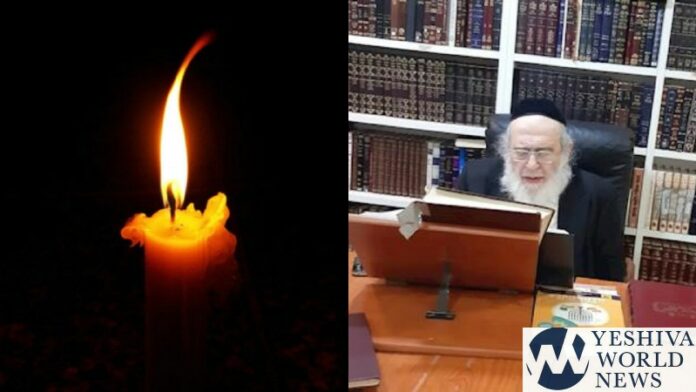 The Torah community of Paris was plunged into mourning with the death of Hagaon HaRav Massoud Ben Chamu, 72, the Rav of the Kehillas Mekor Chaim in Paris and the posek of the Chareidi community, from the coronavirus, B’Chadrei Chareidim reported.

After Purim, during which hundreds of congregants flocked to his home for a bracha, Rav Chamu began feeling weak. His condition deteriorated and last week he was brought to the hospital in serious condition. French Jewry gathered to daven for him but the decree was sealed and he was niftar on Wednesday morning.

Just a few weeks ago, Harav Ben Chamu participated in the Yeshivas Mir dinner which was held in France, where he was the speaker of honor.

Harav Ben Chamu, beside serving as the Rav of the Mekor Chaim kehilla with hundreds of members, served as the Dayan and Moreh Tzedek of the Beis Din of Hagaon Harav Mordechai Rottenberg in Paris.

Harav Ben Chamu was known as a tremendous gaon who would answer every shaila in the Chareidi kehilla and was considered an eminent posek in every halachic matter, from geirus to the smallest details of the Chareidi community. He gave shiurim to hundreds in his kehilla from morning until evening. In the past, when he used to live at a distance from the shul, he would walk an hour there and back to get to shul every Shabbos.

His mesirus nefesh for the community knew no bounds. He would give his personal phone number to anyone who wanted it. He was also a great ba’al tzedaka, both on a personal level, and a communal level, by encouraging his kehilla to support Torah institutions and yeshivos.

One of the community members told B’Chadrei Chareidim: “He was the posek that everyone went to who received all the shailos and paskened on all of them. He was moiser nefesh for the tzibur, in shiurim, in tefilos and every topic. He was a great man – his tefillos were tefillos of bechi and bakasha.”

[In Milan: Father Of 4, Well-Known Member Of Jewish Kehilla, Dies Of The Coronavirus]