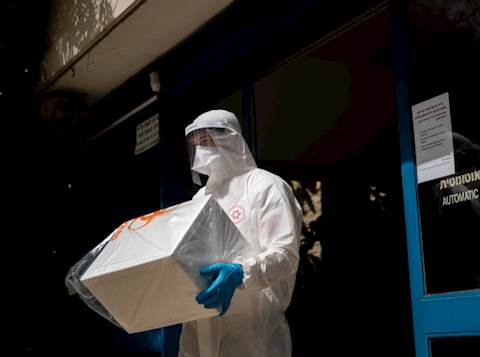 Government authorities in many countries have issued orders to cremate all coronavirus victims and ZAKA organizations around the world are struggling to find solutions for Jewish meisim.

In England, after much effort by both Jewish and Muslim religious leaders, the government agreed to include a stipulation to the law that victims whose families object to cremation for religious reasons will not be cremated.

An urgent shaila arose on Friday in the Jewish community of Bucharest, Romania after government authorities instructed that coronavirus victims must be buried on the same day or be cremated, Chareidim10 reported.

The community asked Rav Yaakov Rojah, a Zakah rav, what do if a Jew dies from the coronavirus on Shabbos. Should they allow the Jew to be cremated or is there a halachic allowance to bury the meis on Shabbos through a nachri?

Rav Rojah found a source for a heter, supported by an incident that happened many years ago in Jerusalem, published in a monthly journal called Toras Eretz Yisrael. There was a terrible stench due to a meis in Yerushalayim to the point where no one could bear to be in the same building. The Rav of Yerushalayim at the time, Harav Shmuel Salant, z’tl, allowed the meis to be buried on Shabbos by a nachri to avoid bizayon ha’meis.

ZAKA head Yehudah Meshi-Zahav said: “We’re receiving dozens of appeals from Jewish communities around the world to prevent cremation of bodies in the wake of government directives. We will make every effort to preserve Kavod HaMeis like we constantly battle to do. We daven every day and hope that the pandemic ends and we can assist in happy events only.”