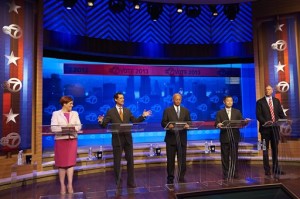 Bill de Blasio has managed to solidify his lead over his rivals, Christine Quinn and Bill Thompson, who’re now battling it out for the 2nd place in a possible runoff primary,a new poll shows.

“As they say, you want to peak at the right time – de Blasio has peaked at the right time,” said Lee Miringoff, director of the Marist College Institute for Public Opinion. “He’s positioned right where he wants to be.”

“The surge is real. Right now he’s within striking distance of 40 percent. And if he doesn’t reach 40 percent, he would certainly be the early favorite for the runoff,” he added.

With 8% undecided, the remaining candidates are in single digits. Anthony Weiner, has dropped to 7 percent, just ahead of Comptroller John Liu’s 5 percent. Rev. Erick Salgado and Sal Albanese remain stuck at 1 percent.

“It’s going to be a tight race though Election Day, but come Tuesday we are confident that voters will put Christine Quinn into the runoff because they want a mayor who doesn’t just talk like a progressive, but has a history of delivering like one,” Ms. Quinn’s spokesman, Mike Morey, told the WSJ.

It’s important to note that the poll was conducted Tuesday through Friday, leaving out a possible 6% of the electorate – Orthodox Jews – who did not pick up phones due to the observance of Rosh Hashanah.