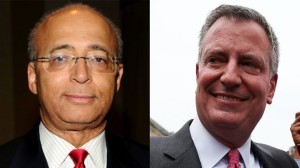 As the New York City mayoral race paused Wednesday for remembrances of the Sept. 11 attacks, the chaotic campaign remained without an answer a day after the primary as to whether the top Democratic finisher, Public Advocate Bill de Blasio, will be forced into a runoff.

With all precincts reporting, the Board of Elections said de Blasio had 40.12 percent of the vote, a whisker above the 40 percent threshold he needs to avoid an automatic Oct. 1 one-on-one showdown with second-place finisher Bill Thompson.

Election officials will recount the votes Friday, according to Board of Elections spokeswoman Valerie Vazquez. And at least 19,038 outstanding absentee and special ballots will be added to the total Monday, she said.

The new total could push the Democrats into a runoff.

Neither de Blasio nor Thompson addressed vote-counting Wednesday, as both followed city tradition by abstaining from campaigning on Sept. 11.

With de Blasio so close to 40 percent, Democratic leaders may pressure Thompson to drop out of the race in the name of party unity. Exit polling shows de Blasio would handily defeat Thompson in a runoff, 52 to 34 percent, with 9 percent of voters saying they would stay home.

But Thompson made clear Tuesday that he wanted to continue campaigning, a stance he is expected to reiterate Thursday.

Thompson, an ex-comptroller and his party’s 2009 nominee for mayor, has 26.2 percent of the vote. He was followed by City Council Speaker Christine Quinn at 15 percent, Comptroller John Liu at 7 percent and ex-U.S. Rep. Anthony Weiner at 5 percent.

De Blasio, who made his interracial family and quest to fight the city’s economic inequality the centerpieces of his campaign, made no mention of the potential runoff in his speech to supporters late Tuesday.

“We are better as a city when we make sure that everyone has a shot,” de Blasio told the raucous crowd. “We begin tonight.”

His rise was as sudden as it was unexpected.

Not even two months ago, de Blasio was an afterthought in the campaign but surged thanks in part to an ad campaign that featured his 15-year-old Afro-sporting son, Dante, who became such a cult figure that the campaign embraced the Twitter hash tag (hash)fromentum.

And more than any other candidate, de Blasio benefited from the rapid fall of Weiner, who was leading in the polls before he was felled by his old demons.

Weiner’s run was in part a political comeback attempt after a sexting scandal forced him to resign from Congress in 2011. But a gossip site revealed this summer that Weiner used the online handle Carlos Danger to continue to send X-rated messages to women even after he left office.

His ill-fated campaign had two final embarrassments in its last moments: One of his online paramours, Sydney Leathers, tried to crash his primary night rally and Weiner was caught making an obscene gesture at reporters as he was driven away.

The exit polling showed the appeal of de Blasio, who holds the position of the city’s official watchdog, to be broad-based: He was ahead in all five boroughs; was even with Thompson, the only African-American candidate, with black voters; and was ahead of Quinn, the lone woman in the race, with female voters. He also led Quinn among gay voters; she is openly gay.

The voter interviews were conducted by Edison Media Research for The Associated Press and other news organizations.

The winner of the mayor’s race in November will assume the helm of the nation’s largest city at a critical juncture, as its crime rate shrinks but income inequality widens, and the nearly completed One World Trade Center symbolizes a new era after the terrorist attacks of 2001.

Nearly three-quarters of Democratic primary voters said in the exit polls that the next mayor ought to move away from the policies of Mayor Michael Bloomberg, who took over in the months after the attacks and whose tenure is seen as a symbol of the post-9/11 era in the city.

De Blasio, 52, has fashioned himself as the cleanest break from the Bloomberg years, proposing a tax on the wealthy to fund universal pre-kindergarten and changes to city police practices he says discriminate against minorities.

On the Republican side, the candidates largely pledged to follow Bloomberg’s lead. Lhota, former head of the region’s transit agency and a one-time deputy mayor under Rudolph Giuliani, led the race from start to finish, fending off the self-financed bid of billionaire grocery store magnate John Catsimatidis.

And another scandal-scarred politician, Eliot Spitzer, who resigned as governor in 2008 after paying for sex with prostitutes, tried to run a self-financed campaign for the lesser office of city comptroller. But his distant, television-heavy campaign struggled to connect with voters and he lost Tuesday’s primary to Manhattan Borough President Scott Stringer.