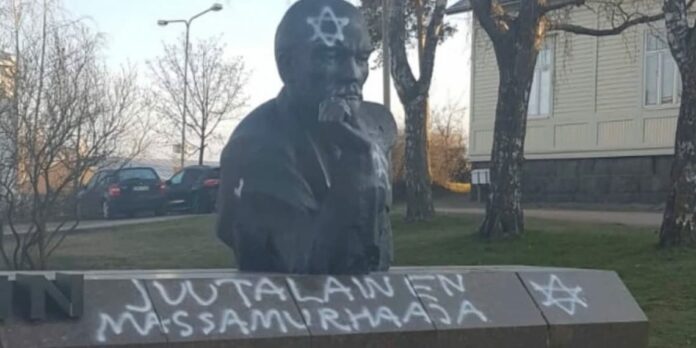 International Workers’ Day, also known as May Day, a day similar to Labor Day in the US, is celebrated on May 1st in many countries throughout the world.

In Finland, the day was marred for the Jewish community due to an anti-Semitic incident in the Nordic country, Yisrael Hayom reported. A statue of Vladimir Lenin was vandalized with the words “Jewish mass murderer” and an image of a Star of David in the town of Kotka in southern Finland. The week before, a Jewish cemetery in the nearby city of Hamina was vandalized.

A member of the Finnish Jewish community told Israel Hayom: “Finland is now like other ‎places. In recent months, there has been a rise in anti-Semitic incidents, in which Jews are blamed for ‎the coronavirus pandemic.”

‎”This is notable in online discourse and also in the stickers distributed throughout Helsinki by the ‎Nordic Resistance Movement [a neo-Nazi organization].”

The anti-Semitic incidents are particularly startling in Finland, that perhaps due to its tiny Jewish community of about 1,500 Jews in a population of about 5.5 million, has very little anti-Semitism. In fact, during the Holocaust, as Jews throughout Europe were murdered by the Nazis with the enthusiastic help of their neighbors, Finland refused to allow the Nazis to harm their Jews despite the fact that Finland allied themselves with Nazi Germany during the war.

Finland’s alliance with Germany was based on its will to survive since the alternative was being swallowed by the Soviet bear, which by 1942 had repeatedly attacked the Nordic country. So when Heinrich Himmler, the head of the SS,  visited Finland during the war and generously offered to help the Finns with their “Jewish problem,” he was promptly told that Finland didn’t have a Jewish problem.

A fifth of the Jewish population served in the Finnish Army during World War II, fighting against the Russians alongside Nazi soldiers without experiencing anti-Semitism. Three of the Jews were even awarded the Iron Cross, the highest military honor awarded by Nazi Germany, but all three refused to accept the medal.

At one point, the Finnish Jews in the army even formed a makeshift shul near the front with a Sefer Torah sent in from Helsinki and held regular tefillos amidst the Nazi soldiers.

Most of Finland’s Jews live in Helsinki, the capital and most populous city in the country. There are two shuls, one in Helsinki and one in Turku. There’s also a Jewish day school with about 110 students, most of whom are children of Israelis working in Finland, as well as an active Chabad house.

The coronavirus pandemic, which has infected 5,176 Finns and killed 220, has managed to do what even the Holocaust didn’t – stir up anti-Semitism.