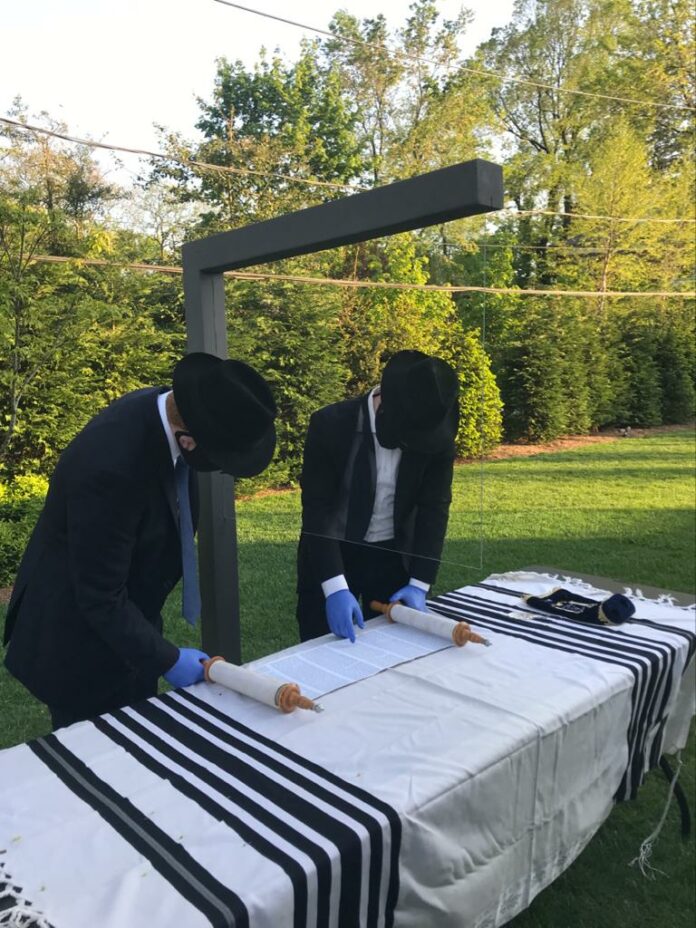 In light of the Corona pandemic, there is a new device now called the Safer Torah Shield made out of wood and plexiglass that is designed to enhance the safety of Krias HaTorah, while at the same time, not compromising on halacha.    It is a device that is already in use in numerous outdoor minyanim.

As most readers are now aware, a number of community Vaad haRabbonim organizations have started to allow certain types of outdoor minyanim – provided that safety precautions be carefully implemented.  As a result, people are looking for ways to enhance upgrade both the safety and the halachic hiddurim of Krias HaTorah – both of the outdoor minyanim as well as the future minyanim in shuls.

We can assume that the eventual “return to normal” will take place in different phases.  Only after each phase proves to be absolutely safe, will the Rabbonim in consultation with doctors, allow people to try or move on to the next phase.

The first phase will be (or already is) outdoor minyanim with safe and proper distancing – with only pre-approved and vetted attendees.  There will be no aliyos for different people that were not living under the same roof – including the baal koreh.

The fourth phase is when everything is over – and allowing regular aliyos again.

The developers of the “Safer Torah Shield” claim that their device enhances the safety at each and every phase. They warn that it should not be used to create a false sense of security or safety, and should only be used under the guidance of Poskim and community Rabbonim.

Essentially, the Safer Torah Shield is a sheet of suspended plexiglass fixed onto a wooden structure held over the Torah.  The device serves to separate the Baal Koreh and the one who is receiving the Aliyah.

It can be used to enhance the safety of each of the aforementioned phases.  In the first phase, if community Rabbonim approve, it will reduce or protect people from the risk of possible transmission – even from people living under the same roof.  In the second and third phase, it will do the same thing.  Also, it can be used during the fourth phase as well – just in case COVID does not really go away entirely.

Indeed, the manufacturers have designed a mahogany version of the device – in case the Safer Torah Shield becomes a permamnet new fixture in our shuls and Batei Midrashim.

So what are the halachic issues involved?  Currently, the backyard minyanim that have received halachic sanction to open are either giving the baal koreh all seven aliyos or are calling up brothers one after another for aliyos.  The former is a question of possible bracha levatalah (although b’shaas hadchak it is permitted).  The latter is a problem of ayin hara.  Rav Yiztchok Zilberstein, by the way, is of the opinion that it is preferable to give the consecutive aliyos to brothers.  It seems that most of the outdoor minyanim that this author has surveyed, however, are opting for the former.  Another issue is that for those who give all seven aliyos to the baal koreh – they cannot call him for maftir, and therefore, it is left out – according to most Poskim.

There is also another advantage in that people who generally need an Aliyah would now be able to safely receive one.

Another question is whether at the first three stages it will cause people to assume that they are safer with the device than otherwise.  If they do assume this, will they then decide to prematurely skip a step?  True, the manufacturers have stated that it should only be implemented with the guidance of their Rabbi, but not always do people listen.

On the other hand, we are using gloves, masks, and plexiglass to go shopping – why should we not use these items for kriyas haTorah as well?

The device can be purchased at AG Customs at [email protected]