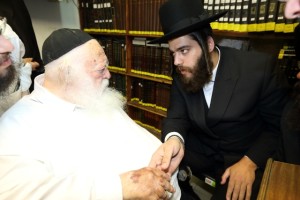 Sruly Porush, a son of MK Meir Porush seeking to become the next mayor of Elad arrived in Bnei Brak on Tuesday, 13 Tishrei 5774. The young Porush was seeking a bracha from HaGaon HaRav Aaron Yehuda Leib Shteinman Shlita and HaGaon HaRav Chaim Kanievsky Shlita and his aides report that he was received warmly by gedolim.

Deputy Elad Mayor Chaim Meir Katz, a Vishnitzer chossid, escorted Porush, who just signed an agreement in which Vishnitz is backing his election bid. Askanim Yishai Klein and Meir Rosenfeld were also on hand, accompanying Porush on his visit.