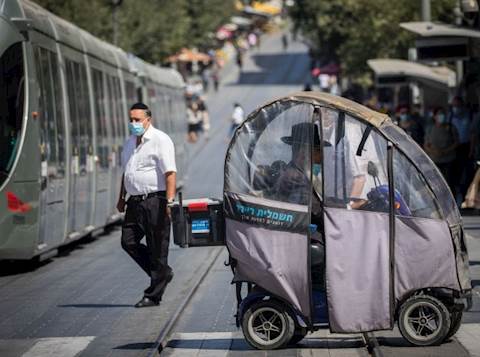 The Health Ministry said on Tuesday morning that 714 new coronavirus cases have been recorded in the past 24 hours, the highest number of daily cases since the uptick in cases began at the beginning of June and the highest daily count since April 2.

The total number of active cases has risen to 7,096, with 46 in serious condition, of whom 24 are ventilated. Another death was recorded, raising the death toll to 320.

Finance Minister Yisrael Katz spoke about the new restrictions the government enacted late Monday night limiting the number of people allowed at gatherings and events, saying that the government’s goal is to prevent a total lockdown.

“I can’t promise there won’t be a general lockdown but I’ll do everything I can to avoid it,” Katz said on Army Radio on Tuesday morning. “A general lockdown will be disastrous for the economy.”

Health Ministry Director-General Prof. Chezy Levy said on Tuesday that Israel “has not lost control of the coronavirus situation. The semantics over whether this is a ‘second wave’ is not helpful. The virus will be with us for the foreseeable future.”

The hospital’s announcement about the closure of the geriatric rehabilitation ward, which the hospital says is temporary, is being slammed by some as harming a vulnerable population.

Ichilov responded to the report by stating: “A final decision about how a second coronavirus department will be opened has not yet been made.”