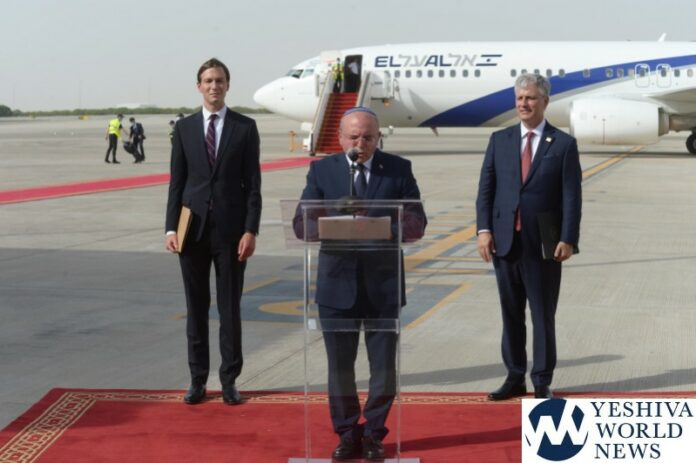 Today, there was a historic flight from Eretz Yisroel to the United Arab Emirates, which portends a number of other flights to follow.  Fascinatingly enough, Saudi Arabia allowed the “historic” flight to cross its airspace, according to President Trump’s advisor and sil, Jared Kushner, said at Abu Dhabi shortly after the flight landed Monday.

“This is the first time this has ever happened, I would like to thank the Kingdom of Saudi Arabia for making that possible,” said Kushner, shortly after the flight landed at Abu Dhabi Airport.

All of this excitement, of course, bring up the halachic issue of when it is permitted or not to leave Eretz Yisroel.  It is interesting to note that the reasons for the prohibition of leaving Eretz Yisroel cited by the authorities are actually quite varied. We will explore these reasons below.

The Ramban (Bamidbar 33:53) explains the prohibition on account of the mitzvah to settle in Eretz Yisrael. The Ramban, if we recall, is of the opinion that the Torah mitzvah to settle the land of Israel is applicable nowadays, as well.

The Rashbam (Bava Basra 91b) explains that the prohibition exists because by leaving the land, one is actively removing oneself from the mitzvos that are uniquely dependent upon being present in Israel.

The Lechem Mishnah (Melachim 5:12) explains that because Israel is holy, it is forbidden to leave it.

Finally, a fourth reason given is that prayer in Israel is much more effective, and the prohibition was made so that the nation of Israel not remain bereft of those praying on its behalf in the place where prayer is most efficacious.

Is it a Torah or rabbinic prohibition? Rav Moshe Feinstein, zt”l (Igros Moshe, Y.D. Vol. I, No. 120), indicates that it is rabbinic.  That being the case, in a case of a doubt there is greater leniency.  The language of the Maharitatz (Siman 85), however, indicates that he learns the prohibition as Biblical – not like Rav Feinstein zt”l.  He writes that the source for the Rambam’s leniency regarding leaving for business comes from a fortiori argument from leaving Israel to go Egypt.  If it is permitted regarding Egypt it is certainly permitted regarding other lands where the prohibition is not explicit in the Torah.  His language in the latter half of the response is indicative that it is still a biblical prohibition, but not one that is explicit.  The Chochmas Adam in his Mishpetei Aretz 11:14, however, also learns that the prohibition is Rabbinic.

There are various heterim that are found in the poskim to permit leaving Eretz Yisroel.

For the mitzvah of kibud av v’eim, honoring one’s parents, it is certainly permitted to leave Israel. There are two circumstances described in the poskim:

One, where one’s parents are traveling to Israel; in such a case, one is permitted to leave Israel proper to greet and accompany them. The other case is where one leaves Israel to tend to another need involving kibud av v’eim. The former case is permitted by all authorities based upon a Gemara in Kiddushin (31a). The latter case is the subject of some debate. The consensus of poskim is that in that case it is permitted, as well.  If, however, your parents need you because they are in danger, then one would certainly be permitted to go. Indeed, some poskim even permit one to permanently leave Israel when one leaves for the mitzvah of kibud av v’eim. Beis Shlomo, Y.D. Vol. II, No. 94, citing Rashi’s interpretation of Kiddushin 31a. The Maharsha, however, seems to learn otherwise. See Chayei Moshe 48:37.

Others disagree and write that it is only permitted if one has in mind to return. Clearly, however, there are no boundary issues when it comes to kibud av v’eim.

One is also permitted to leave Eretz Yisrael to seek medical care or for health reasons in general.

Additionally, it is permissible to leave Israel to travel to the gravesites of tzaddikim, such as in Uman, in order to pray there (see Shaarei Teshuvah 568:20).

According to Rav Ovadiah Yosef zt”l (Yechave Da’as 5:57) one would also be permitted to leave Eretz Yisrael to teach Torah to others. This issue came up a number of years ago with a now prominent rosh yeshiva who was offered a prestigious post outside of Israel. The gedolim of Eretz Yisrael told him to take the position, but his wife refused to follow him. Rav Chatzkel Levenstein, zt’l, also took a position outside of Israel in the Mirrer Yeshiva when it was offered to him.

A fascinating additional heter is found in the Mishnah Berurah (531:14). He writes that one may leave Israel to see a good friend, because this is considered a d’var mitzvah. Poskim extend this to include seeing one’s children and grandchildren.

One may leave Eretz Yisrael to find a shidduch outside of Israel (Rambam, Melachim 5:9). This is true even if one would be able to find a suitable match inside of Israel, if marriage to another person (found outside of Israel) is preferred. Generally speaking, this is only if one has in mind to return to Israel. Interestingly enough, if one cannot find a spouse in Israel, it is permissible to go chutz l’Aretz and settle there on a permanent basis (Maharit, Kiddushin 111a).

One may leave Israel to conduct one’s business affairs (Rambam, ibid.). This is only permitted, however, if his intention is to return.

MAY ONE TRAVEL IF ONE HAS LEFT WITH A HETER

One last question brings us back to one of our original questions.  May one stay and travel a bit if he had originally left with permission.  If the prohibition is Rabbinic then it would seem to be permitted.  if, however, it is biblical, then it would seem that the reason is like that of the Ramban cited above and one would not be permitted to delay further on account of the constant Mitzvah of being in Eretz Yisroel.  Of course, one should consult with one’s own Rav and Posaik in regard to all of these issues.