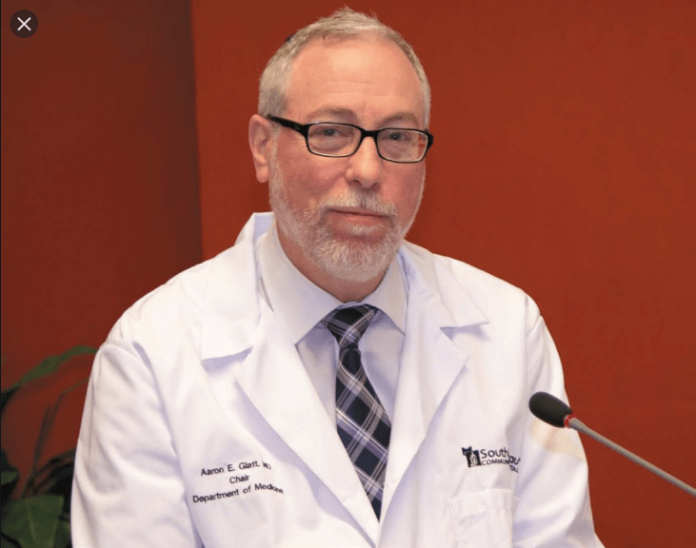 For a few months now, Rabbi Dr. Aaron Glatt has been working hard trying to protect us all.  Its not a pleasant message that he bears.  No one wants their smachot to be curtailed.  And most people, including this author, genuinely hate wearing masks.  But there are two types of “anti-maskers.”

There are those who hate them but end up doing it anyway because they have to – and yet find any excuse not to be in such a situation.  For example, my kid has not gotten a haircut in almost two months.  I took him to the barber and there was a wait that was at least 30 minutes if not more.  I sat there for 17 minutes with a mask and couldn’t stand it any more.  I left with my kid.

And then there are those whose hate for masks is such that they self-deceive and rationalize away not wearing a mask.  Those, in my opinion, are the people behind the attack on the good Dr. Glatt.  The letter of attack has circulated in WhatsApp groups throughout the Five Towns and Flatbush.  And now I hear it has spread even further.

The letter starts off nice enough – “All of your efforts on behalf of this community in the past and present are appreciated. The fact that you genuinely care is beautiful.”

Ah, but then comes the first of the sentences seething with the fruits of the self-deception:  “despite the adoration of your cult following, there is a huge segment of the community that is extremely disappointed in you.”

The letter writers, who hide behind anonymity, claim that “it is time for us, the community, to get a chance to respond..”

“We are upset because you only seem to care about Covid itself and the elderly and vulnerable.”

Whoa.. Did we just read that correctly?  You only seem to care about the elderly and vulnerable??  When did Friedrich Wilhelm Nietzsche suddenly get Smicha that his views – once anathema to Torah Judaism suddenly become in vogue?

“What about the students of Darchei and TAG sent home by your beloved pals at the DOH?”

Yes, it was horrible that they were sent home and Dr. Glatt is not happy about it.  But truth to tell – were they masking and social distancing?  Kids got COVID.  Their parents got it too.  And people are sick.

“Chinuch is decimated yet again as schools in our community are shuttered while gyms are open and protests in the streets are greenlighted.”

It is sad that Chinuch was decimated – boruch Hashem it was only for a few days.  But if these closures saved even just a handful of lives and made us all take it more seriously during the uptick – wasn’t it perhaps worth it?

“What about things like suicidality, depression, Shalom Bayis, mental health, parnassah, physical health, and so much more?”

Yes, these are problems, no question.  But all that Dr. Glatt wants is that we take it seriously and stop the self-deception.  How many Darchei Boys, TAG girls and TMM girls have committed suicide during COVID?  Zero.  How many have died from COVID or have gotten seriously ill from it?  Too many.

“Yes NONE of us want another grandparent or parent or relative to die. But are we evil because we also don’t want to see a 14-year-old boy spiral in his Judaism, a couple get divorced, a father lose his job, and worse?”

No – no one is evil here.  Dr. Glatt does not think anyone is evil, just under an understandable form of self-deception.  Are you not creating a strawman here to get across your viewpoint?

“These aren’t just financial costs: there are LIVES at risk on both sides of the ledger. Public policy was always supposed to take BOTH sides of the equation into account. Not just death counts and positivity rates.”

Are you aware that people die every year because they can’t escape from their seat-belts in cases of drowning and fires?  They don’t keep statistics on it – but it is known to be very rare.  Seatbelts, however, save 15,000 lives each year.  Do you know that doctors must take and must pass advanced statistics courses?  There is no such requirement, however, for Whatsapp letter writers.  And so, there is not a doubt in our minds that Dr. Glatt takes both sides of the ledger when he discusses proper COVID protocols.

The question is if you value our children and their chinuch at all or if the only thing that matters is the risk of death to our elderly. Should 5-year olds never learn to read? Six-year olds never learn to daven? Should teen boys and girls hang out together in the streets? Do parents stay home from work and sink their finances or leave their children home alone? Please don’t pretend that Zoom is a viable option during the Fall when bowling, pizza, and more are open.

It is NOT a viable option.  All Rabbi Dr. Glatt wants is that we approach things safely.  Is that we socially distance and that we wear masks.  The Whatsapp letter undermines his message.  But calling him a moiser?  Please, please, just stop this insanity.  Let’s stop the name-calling – especially against a doctor and a Rav.  And especially during aseres yemei teshuvah.

masking – sadly, the area that is your biggest pet peeve, is the scariest example of all of the harm that you can do in the name of righteousness.

Masks work.  I hate them too, but they work.  Stop with the attacks on the doctor/Rabbi.

So if masking works and distancing works, why is covid still a thing 7 months later?

Well, we know smoking is bad and there are still people dying of lung-cancer.  The answer?  People aren’t doing it.  Period.  The more people who do it – the more lives are saved.

Have you considered that perhaps you don’t need to blame anyone? That someone who simply wanted to give her daughter a nice wedding event isn’t a monster?

No – not a monster.  Just someone who doesn’t realize that his or her wedding enabled people to allow themselves to get sick.  Yes, one can argue that they made their own decisions – but don’t we not want to be the cause of someone getting very sick?

Also, just one more very import point:  Dr. Glatt has been at the forefront and frontlines of safely opening up the schools and the local camps.  He has spent countless hours advising our yeshivos and schools how to safely keep  OPEN and how to keep our kids in school.

The schools have opened successfully, and it was politics that closed them down – not Dr. Glatt – because the Jewish schools did it while NYC public schools didn’t open up.  This is a testimony to the dedicated work of our doctors – of whom Dr. Glatt has played a critical role.  The WhatsApp letter is doing the opposite.

In short – please let Dr. Glatt do his job.