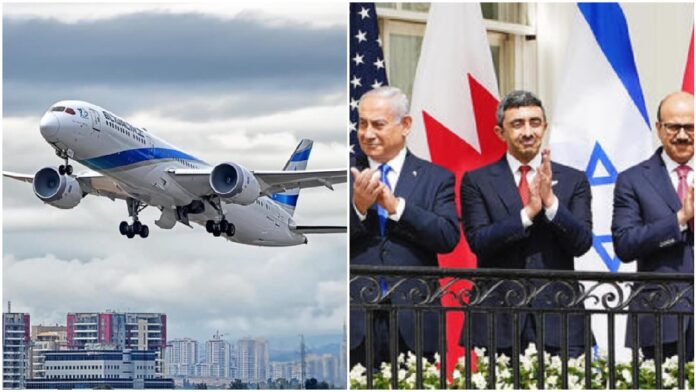 El Al Airlines won a tender to fly a joint Israeli-US delegation on Sunday for discussions on finalizing the normalization agreement signed between Israel and Bahrain as part of the Abraham Accords last month in Washington.

Israir Airlines also bid for the tender, Globes reported. Israir had also submitted a bid to fly the joint delegation to the United Arab Emirates last month but lost to El Al due to the fact that its planes lack business class seats. Following that loss, Israir reconfigured its A320 airbuses with eight business class seats in order to nab the next tender but lost to El Al for the Bahrain trip.

On Wednesday, history was made when the Emirati national carrier Etihad Airlines flew over Israel for the first time on the way to Milan. The historical moment was possible due to an open-skies agreement signed last week by Israel and Jordan, allowing overflights through Israeli and Jordanian air space.

History was made today. “Captain, we are thrilled and honored to welcome you to overfly Israel 🇮🇱.” The UAE 🇦🇪 crew then responds with a beautiful message for peace and prosperity in the region. @etihad h/t @sharonidan pic.twitter.com/pxQ8ef5kcI

The agreement significantly shortens the time for flights from the Gulf States, Asia and the Far East to Europe and North America. Israeli airspace will now be used by a number of Arab countries, including Iraq, Qatar, and Saudi Arabia.

Next week, Etihad Airlines and the Maman Group are flying a delegation of Israeli tourist agents from Israel to the UAE for meetings with Emirati travel agents.

Direct flights between Israel and the UAE, which were originally slated to begin in October, have been postponed until January 2021 due to the coronavirus, an Israeli official said earlier this week.