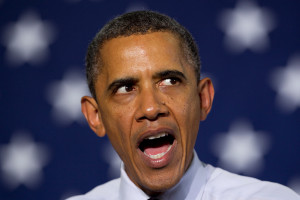 For President Barack Obama, the outcome of this week’s fiscal fights with Republicans could have broad consequences for his stalled second-term agenda.

A favorable deal for the White House might give Obama an opening to marginalize the tea party Republicans who have tried to win concessions from him in order to reopen the government and raise the nation’s debt ceiling. But if no agreement is reached by Thursday’s debt limit deadline, Obama will become the first modern president to preside over a government default, a dubious distinction with potentially calamitous economic consequences that could consume the White House for the foreseeable future.

Another, perhaps more likely, option: Obama ends up signing short term bills that keep Washington in the never-ending cycle of deadline-driven budget battles. For Obama, that would mean fiscal issues would keep consuming the oxygen in the nation’s capital at a time when he is already watching his window for passing significant domestic legislation close.

“It’s a ticking clock,” Julian Zelizer, a political historian at Princeton University, said of presidential second terms. “He’s already into the red zone in terms of getting things done.”

On Monday, Obama and Senate leaders indicated they were optimistic that an agreement might be at hand to prevent a national financial default and reopen the government after a two-week partial shutdown. Officials in both parties were discussing a proposal to raise the debt ceiling through the spring, as well as a shorter deal to fund the government for several weeks.

“There has been some progress on the Senate side, with Republicans recognizing it’s not tenable, it’s not smart, it’s not good for the American people to let America default,” Obama said.

The president had planned to meet with bipartisan congressional leaders Monday afternoon, but the talks were canceled. The move was seen as a sign that progress was being made in private negotiations on Capitol Hill. But even if the Senate can reach an agreement, the fate of the deal in the Republican-led House would be uncertain.

Even before Washington ground to a halt this month, Obama was struggling to score significant legislative victories in his second term. A push for stricter gun control laws collapsed in the Senate. An immigration reform bill did get through the Senate, but stalled in the House and the future of the landmark legislation is deeply uncertain. And there has been virtually no legislative progress on a host of other issues Obama pledged to tackle in his second term, including expanding early childhood education and raising the minimum wage.

Questions about Obama’s political clout also deepened last month, when congressional lawmakers, including many Democrats, appeared on the brink of rejecting his request for approving military action against Syria. A last-minute diplomatic overture from Russia prevented Obama from having to hold a vote, saving him from what would have almost certainly been an embarrassing defeat.

But missteps by Republicans during the current budget fight have helped Obama regain his footing. Recent polls show GOP lawmakers bearing the brunt of the public’s blame for the shutdown, including a new Washington Post-ABC News survey out Monday that showed 74 percent of Americans disapprove of the way Republicans in Congress have handled the issue, compared to 53 percent who disapprove of Obama’s handling of it.

The tilting of responsibility toward Republicans has hardened the White House’s resolve to make no concessions in exchange for Congress lifting the debt ceiling or reopening the government. After years of trying to compromise with the House GOP leadership, many Democrats see the current debate as an opportunity to finally weaken the chamber’s far-right wing, perhaps clearing the way for progress on issues like immigration that have the support of many Republican moderates.

However, Democrats alone can’t make that happen. It will require some cooperation from House Speaker John Boehner, the Ohio Republican who has largely backed the wishes of tea party-backed lawmakers during the shutdown and debt ceiling discussions. It’s unclear whether Boehner will take a different approach after the matters are resolved, though his tactics will likely be colored by how House Republicans appear positioned for next year’s midterm elections.

Republican strategist Dan Schnur said that even if some GOP lawmakers start tilting to the center after the current budget battles, the president will still face an uphill climb in getting big-ticket legislation done in the coming months.

“There are going to be so many hard feelings on every side that it’s hard to see a great deal of productive legislation coming in the immediate aftermath,” said Schnur, director of a political institute at the University of Southern California.