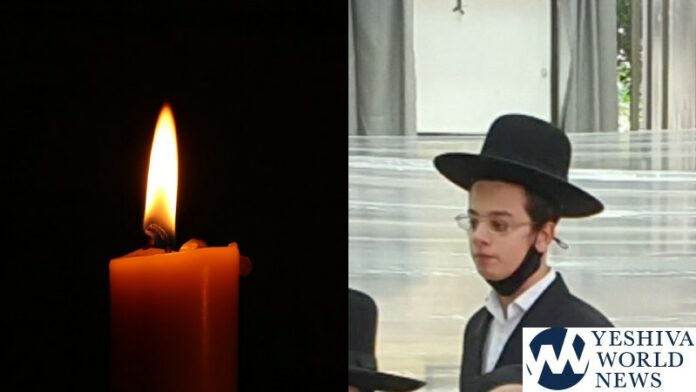 The Chareidi community in Kiryat Gat is reeling in shock from the murder of a 14-year-old boy by his father, 37, who apparently was in the throes of some type of mental fit.

A large number of rescue forces arrived at the family’s villa close to midnight on Wednesday night after the mother called and reported that her husband is stabbing their son. The emergency medical services performed CPR and evacuated the boy to Barzilai Hospital in Ashkelon in critical condition, where the doctors declared his death.

The father fled the scene prior to the arrival of security forces but he was found after an extensive search in the woods behind his home. He was arrested for suspected murder and will be transferred for a psychiatric evaluation.

The mother later said that her husband, a Gerrer chassid and businessman, arrived home in a furious mood and began to wreak violence.

Members of the Gerrer community in Kiryat Gat were in utter shock after hearing the horrific news. “I know the father as a neighbor,” one man told Kan News. ” He’s a very refined person, he davens in the local shul. We never had any incidents with him. They say that he suffered some type of nerve attack and suddenly went crazy.”

A Kan News report said that the father stabbed his son at least 14 times, apparently as the son was asleep in his bed, with his brothers asleep in the same room. The mother and sister apparently tried to physically stop him but were unsuccessful in overpowering him. The mother called the police as her husband stabbed the son.

Other neighbors who knew the family said: “Apparently the father went crazy,” adding that he is an affluent man, a businessman who maintains an import business. “He’s a well-known and well-liked person, a refined and happy person. I would never have expected such a thing from him of all people.”

Other neighbors said that the father hasn’t worked for a year, since the pandemic began, due to the fact that he normally imports products from China, and perhaps that played a part in his mental deterioration.

A Channel 13 News report later on Thursday quoted a relative of the defendant who said that the father underwent some type of alternative treatment on Wednesday. The police are reportedly trying to locate the alternative practitioner.

There were also reports that earlier in the day, the father heard voices and was dancing in his office yelling: “Moshiach is coming.”

The brother added that his brother hadn’t suffered from mental issues in the past. “No such incident ever occurred. He didn’t suffer from mental issues and he very much loved his son.” Other people who knew the family also mentioned that the father greatly invested in his son and was very proud of him.

The brother told Channel 12 News that the family can’t come to terms with what happened. “We don’t understand how this happened. He was a wonderful man, an exemplary father, a devoted person – he loved other people and loved his family. He was someone who always tried to help others whenever possible. He was extremely devoted to his parents and relatives.”

On Thursday afternoon, the Ashkelon Magistrate’s Court ordered an extension of the suspect’s detainment. “There are testimonies that the father was hearing voices,” the judge said at the hearing. “In the emergency room, he wouldn’t speak, claiming that he was forbidden to talk. Other testimonies speak about his mental state prior to the severe incident. He will be sent for a psychiatric evaluation to assess whether he is fit to be sentenced and if he is responsible for his actions.”

“This was a very severe incident,” said MDA paramedic Amir Peretz. “When I arrived at the house, they led me to the boy who was lying unconscious, he wasn’t breathing and had no pulse, with bleeding wounds on his body.”

The police commander of the Lachish area, Deputy Superintendent Ronen Avnieli, who arrived at the scene, held a special situational assessment, during which he decided to establish a special investigative team to examine the incident.