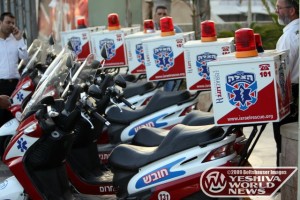 Road safety officials continue efforts to reduce the number of people killed and injured on the nation’s roads. One of the commonly heard messages is directed at pedestrians, not motorists – to cross at authorized crosswalks only and not in the middle of a street.

Sadly, despite the fact crosswalks are prominently marked throughout Israel, 60% of pedestrians struck by a motorized vehicle are hit in an authorized crosswalk. A new advert being run by the Ohr Yarok NGO seeks to heighten pedestrian awareness, calling on pedestrians to get rid of the “false feeling of confidence” we have when crossing in an authorized crosswalk and to stop for a moment and evaluate the situation. In short, while one may have the right of way one should do what one can to avoid being struck.

In 75% of the struck pedestrian cases, motorists fail to give pedestrians the right of way.

The law compels a driver to slow down as s/he approaches a crosswalk and to yield the right of way to pedestrians. Failure to do so may result in a 500 NIS fine, a summons to appear in court and 10 points.