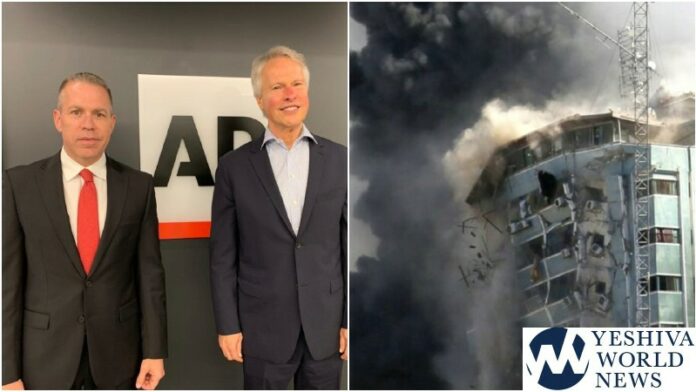 In the wake of the destruction of the AP building in the Gaza Strip, which was also home to Hamas intelligence offices, Israel’s Ambassador to the US Gilad Erdan visited the AP headquarters in New York on Monday.

During his visit, Erdan met with President and CEO Gary Pruitt and Vice President of International News Ian Phillips.

“I visited the AP headquarters in New York to explain to top executives that the building housing their Gaza operation was being used by Hamas terrorists trying to jam the Iron Dome – that is why it was prioritized by the IDF during last month’s operation,” Erdan stated.

Erdan told Pruitt that “AP is one of the most important news agencies in the world and Israel doesn’t think that AP employees were aware it was being cynically used in this way by Hamas for a secret unit.”

“Israel did everything to ensure no employees or civilians were hurt during this operation,” Erdan said. “In contrast, Hamas is a genocidal terrorist organization that purposely places its terror machine in civilian areas, including in buildings being used by international media outlets.”

“I reaffirmed that Israel upholds the importance of press freedom and strives to ensure the safety of journalists wherever they are reporting. Israel is willing to assist AP in rebuilding its offices and operations in Gaza.”

The bombing of the AP building led to international condemnation but the IDF asserted that the Jala Tower was not only home to the AP, Al-Jazeera and other major media outlets but was also home to a Hamas intelligence office that controlled advanced military devices designed to interfere with the IDF’s GPS reception which could affect Israel’s guided missiles. It also held Hamas’ R&D department and a technology unit.