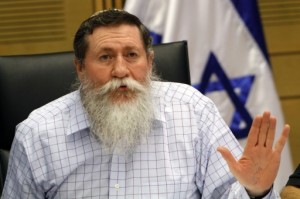 Former MK Yaakov Katz (Ketzaleh) came out against the Bayit Yehudi party and the latter’s support for the new marriage registration bill.

Katz stated that as a politician, it is legitimate for Naftali Bennett to act in different ways towards achieving his aspiration of becoming prime minister and this would have been fine if Bennett accomplished this by capitalizing on the power of the large dati leumi community. “It is not legitimate however to continue his partnership with Lapid, who fights against Torah and yishuvim, against mosdos Torah, against the kedusha and tahara of our tzibur and the unnatural partnership is a slap in the face to our entire tzibur.”

Katz continues, explaining the damage to the tzibur at large, all in the name of Bennett seeking to realize his true political ambition, to become prime minister and questioning how he can permit himself to continue when seeking the damage resulting from his actions. He speaks of how Bennett is turning his back on voters, the release of Arab prisoners, and the freezing of construction in Yerushalayim and throughout Yehuda and Shomron. He cites the assault against mosdos Torah and the government’s ongoing talks with the PA (Palestinian Authority), which involves compromise on Yerushalayim. “These are the fruits of the partnership with Lapid” Katz points out.

Using his Facebook page to get his message out, Katz begins with “אוי לרשע ואוי לשכנו”, adding “It is unfair to use our tzibur as your private springboard to the secular world. Even if you believe you are soaring in the polls, at the end of the process you will not succeed.

“The dati leumi public will wise up as it already has in the Jerusalem municipal elections. Even the dati light and less chardali factions cling to the Torah and its scholars and are unwilling to benefit from the pursuit and harassment of the chareidi community.

“This is not how you will achieve your splendor Naftali Bennett, not on the back of Toras Yisrael. Anyone whose goal is to harm Toras and to link up with such people will fail and you too will fail. You are not the first who wages a war against Torah and not the last. As Am Yisrael has been saved in the past, it will be saved from Lapid and those connected to him”.