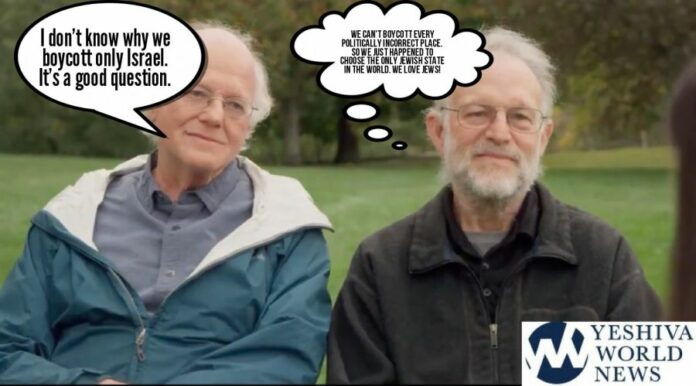 Israel’s Ambassador to the United States and United Nations Gilad Erdan responded on Monday to the Axios interview with the founders of Ben and Jerry’s aired on Sunday on HBO.

“The ignorance and hypocrisy of Ben and his partner Jerry cries out to the heavens,” Erdan said. “Part of the definition of anti-Semitism is precisely to demand from Israel what isn’t demanded of any other country in the world, and Misters Ben and Jerry have no problem with their ice cream being sold to supporters of terrorism but they are boycotting Israel.”

“So I will continue to work that as many states as possible put Ben & Jerry’s and Unilever on their blacklist until this despicable boycott is stopped,” Erdan said firmly.

Founders Ben Cohen and Jerry Greenfield were literally left tongue-tied when the Axios reporter asked them: “You guys are big proponents of voting rights. Why do you still sell ice cream in Georgia, Texas – abortion bans. Why are you still selling there?”

The camera focused on Cohen, who looked dumbfounded and struggled to respond. “I don’t know,” he said with a nervous laugh.

“I mean, it’s an interesting question. I don’t know what that would accomplish. We’re working on those issues – of voting rights…I don’t know. I think you ask a really good question and I would have to sit down and think about it a bit.”

Erdan retweeted that segment of the video, commenting: “When a Jew doesn’t understand that he is essentially assisting anti-Semites and begins to think about it…