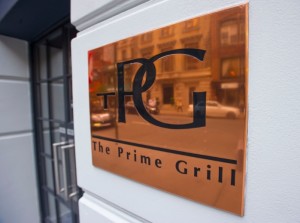 A rogue waiter at The Prime Grill who added a mandatory 20 percent tip to the bill of a Chasidic couple was fired less than 24 hours later after the incident occurred.

“We won’t tolerate this kind of behavior,” said Joey Allaham, owner of The Prime Grill. “We found out about this incident one day after it happened and as soon as it was brought to our attention we researched the incident. Having determined what happened, we called in the waiter, who had only been with us for two months, and fired him right away.”

The incident took place on Sunday night when a Chasidic couple who dined at The Prime Grill noted that their check included a 20 percent gratuity. Questioning the waiter about the amount, they were informed that it was a standard tip that was automatically added for all Chasidic diners. While the couple paid their bill without incident, news of the mandatory surcharge began circulating immediately throughout the Jewish community.

Once informed of the waiter’s actions, management at The Prime Grill took immediate action, and in addition to terminating the waiter, the charge for the couple’s meal, which was paid by credit card, was immediately reversed. Allaham also plans to donate the amount of couple’s check to their favorite charity as a way of apologizing for the mishap, but so far, has been unable to contact the pair, who came to the restaurant without a reservation.

According to Steven Traube, director of operations at The Prime Grill, the waiter admitted that he added the extra charge out of concern that the couple might not leave behind a gratuity.

“He added in the tip by using a button on the register that automatically adds in a 20 percent tip for parties of six or more people,” explained Traube. “We have changed the system so that automatic tips can only be added by a manager.”

Traube stressed that, other than for large parties, The Prime Grill has never had a policy of adding in automatic gratuities for diners of any sort. Traube also noted that there are several managers on the floor at all times in order to provide customers with assistance, should it be required, and expressed his opinion that had a manager been asked about the bogus charge at the time, he would have intervened immediately.

“Customer service has always been and will always be our highest priority,” emphasized Allaham. “We always take responsibility for anything that takes place in our restaurant on the spot and if anyone ever has any questions we urge them to contact one of our managers immediately.”

“We enjoy being a restaurant that is enjoyed by many members of all the Jewish communities and hope to do so in the future,” added Ines Kincaid, general manager at The Prime Grill. “On behalf of The Prime Grill, we deeply apologize for this incident and we will work harder in oversight of our staff to make sure it never occurs again.”