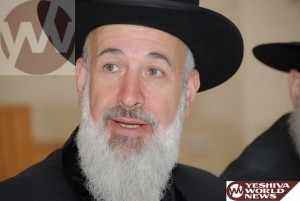 According to journalist Aid Meir, there are some new and interesting developments in the case pertaining to former Chief Rabbi Yonah Metzger. Police reportedly have a recording to Rav Metzger telling an assistant “If you take the blame in this case, I will give you a great deal of money as well as an apartment, just like Shula Zaken did for Ehud Olmert.”

To the rabbi’s poor luck, that aide who he hoped to plead guilty of the charges became the star state witness.

Earlier in the week the rabbi’s remand was extended for nine days. He was arrested following an investigation taking place during recent months, allegedly guilty of money laundering, tax evasion and other white collar crimes.

Reports state that the rabbi traveled abroad in his capacity as chief rabbi and it was during those official trips he raised money for tzedaka organizations, large sums of money. Reports state Rabbi Metzger took as much as 50% of donations as his commission. In addition he did not report that income.

Reports indicate the state has more than one key witness against the former chief rabbi and the prosecutor is releasing statements that the case against the rabbi is quite air tight and the indictment against him will be a most serious one.