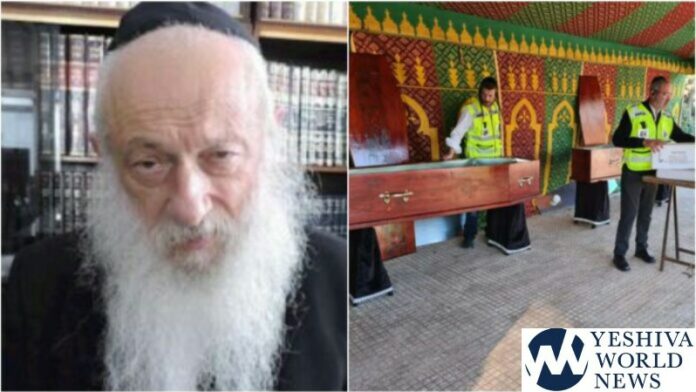 The bodies of seven Jews who passed away of COVID a year and a half ago in Casablanca were transferred for burial in Israel in a special operation carried out by ZAKA volunteers, family representatives, and the Chevra Kadisha in Casablanca.

One of the Jews that passed away was the famed Chabad shaliach and Rav, HaGaon HaRav Shalom Eidelman, z’tl, who passed away at the age of 84 after spending more than 50 years tending to the needs of the Jewish community in Casablanca and throughout Morocco.

When HaRav Eidelman and the other Jews passed away at the beginning of the pandemic, including three relatives of Israeli politician Amir Peretz, they were temporarily buried in Morocco since coronavirus restrictions did not allow them to be buried in Eretz Yisrael. Furthermore, at the time – pre-Abraham Accords – Morocco had no diplomatic ties with Israel and did not allow Israeli planes to land in the country.

When the coronavirus crisis first began, the Jewish community in Morocco was hit hard, with its tiny community (less than 1% of the population) accounting for 10% of the country’s fatalities after many of its members attended a large wedding in the coastal city of Agadir with many guests from France and other countries abroad. The guests who attended the wedding then unwittingly spread the virus in the Jewish community in Casablanca during Purim festivities a few days later.

The operation was carried out with the cooperation of the Israeli Foreign Ministry, the Morrocan King and government, the leaders of the Jewish community in Morocco, and the Chevra Kadish in Casablanca.

Harav Eidelman, z’tl, was born in Russia in the 1930s and escaped with his parents to France during World War II. The Lubavitcher Rebbe, z’tl, later sent Rav Eidelman to shlichus in Morroco which he embarked on only days after his marriage. HaRav Eidelman and his wife tirelessly fulfilled the needs of the Jewish community, founding a Kollel, training Rabbanim and shochtim in the community, including Hagaon Harav Shlomo Amar, and providing countless other services.

The Chabad house that Harav Eidelman and his wife established in Casablanca is the longest-running Chabad house in the world.