“We were shocked and dismayed to hear that a group of Jewish travelers from South Africa, who arrived at Ben Gurion Airport this past Friday, were denied entry into Israel and forcibly returned to their country of origin, and as a result were compelled to desecrate Shabbat,” the letter states.

“That this took place in the Jewish State is simply unconscionable. To further compound the trauma, two of the passengers were making their way to Israel to spend Shabbat with the Kay family, who are mourning the loss of their beloved Eli, h’yd, in last week’s terror attack in Jerusalem.”

“From the reports we received, no attempt was made to accommodate the passengers by allowing them to remain in quarantine over Shabbat.”

“The South African Jewish community has a deep and abiding connection with the State of Israel and we are therefore greatly aggrieved by these events. Moreover, to force fellow Jews to desecrate Shabbat is a violation of the Jewish identity and Jewish values of the state. The manner in which the religious rights of these individuals have been infringed is not something one would expect of any country, and certainly not the Jewish State.”

“On behalf of South Africa’s Rabbis and the communities we represent, we wish to record our strongest objection to the forced desecration of Shabbat,” the Rabbanim concluded.

The letter was signed by Rav Goldstein, Rabbi Yossi Chaikin, chairman of the South African Rabbinical Association, and the Dayanim of the Beis Din of South Africa. The letter was sent in the care of the Ambassador of the State of Israel to South Africa, Mr. Eli Belotsercovsky.

The Prime Minister’s Office has yet to respond to the letter. 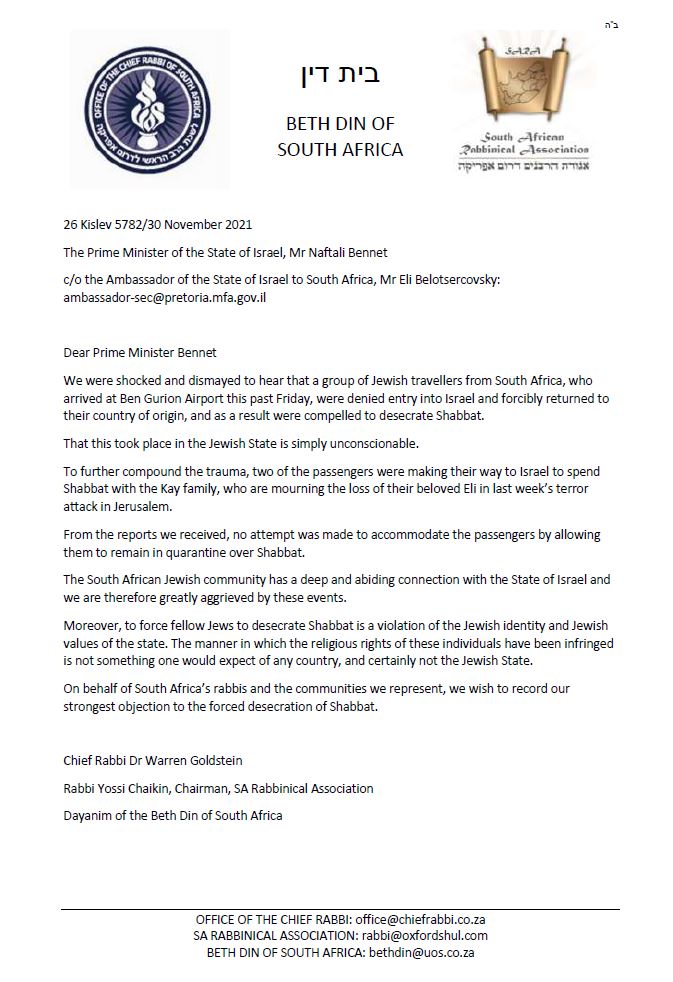