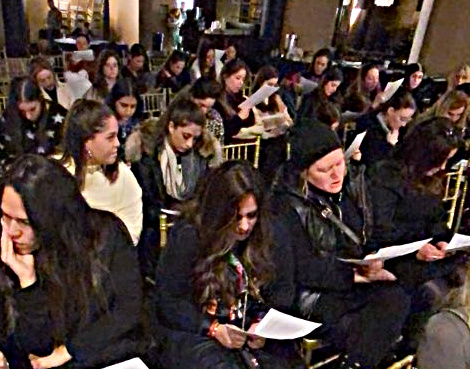 On both Tuesday night and Wednesday night of this week there were gatherings in two local shuls – Beth Shalom and Ohr Torah respectively.  The gatherings were Tehillim sessions, organized by individuals. They were Tehillim sessions for the victims of the horrific tragedy that occurred last Motzei Shabbos – where a drunken individual killed and injured innocent victims.

It was not the first time this has happened.  Almost 4 years ago, Elisheva Kaplan a”h and Yisroel Levin z”l, were tragically killed in a similar accident – through two individuals drunk and recklessly speeding.  People from across the Far Rockaway/Five Towns community came together and davened.

Significantly, at the Tuesday night event, the Tehillim was led by singer Eli Levin – brother of Yisroel Levin z”l who was killed in the April 2018 incident.

In last Motzai Shabbos’s tragedy, Miriam Meltzer, a wonderful mother from Woodmere, remains in critical condition – fighting for her life. Her close friends, Mina Black and Mushkie Friedman arranged for the Tehillim session.

Liel Namdar was a victim of that accident who did not survive.  Miss Namdar was described by the newspapers as a fifteen-year old girl from Long Island.  But Liel Namdar aleha HaShalom was much more. She was a wonderful young tzaddeikes, whose entire essence was that of growth – to grow in dveikus Bashem –  in avodas Hashem.  She was always the first to enter class.  Always asking questions – delving and wanting to know more.  And she constantly expressed hakaras Hatov to her Rebbeim, moros, and teachers.

Liel Namdar personified the ideal Bais Yaakov girl –  She put her ideals into action.  She was always the first to volunteer – to hold the door for others.  Liel had incredible yiras Hashem, remarkable midos, and was a role model to everyone who knew her.

THE ACHDUS FROM TRAGEDY

The gatherings, the classrooms and halls of school, the supermarkets and the very streets of the Five Towns and Rockaway and Great Neck are filled with tears and hugging. The achdus, such an inspiring aspect of this community, is reminiscent of two of the Yomim Tovim throughout the year.  Purim and Shavuos.

On Purim, we faced annihilation from Amalek, and yet we were miraculously saved.  The word in the Megillah is instructive – Nikhalu haYehudim – the Jews became one Kehillah.  My Rebbe, Rav Dovid Kviat zt”l, used to say that the Shalach Manos and the Matanos LaEvyonim of Purim were stablished by Chazal to strengthen that Achdus within our nation forever onward.

Indeed, he pointed out that it was on Purim when we willingly accepted the Torah sh’be’al peh.  Because, according to the Gemorah in Shabbos 88a, it was only through that achdus that we merited to accept the Torah.  The Daf Yomi, for example, which unites all of Klal Yisroel, was only brought about through the achdus of Klal Yisroel that happened on Purim.

The same is true with Shavuos – Matan Torah.  Vayeechan Yisroel, And Israel encamped is conjugated in the singular.  Ish Echad b’lev echad – like one man, with one heart.  My Rebbe explained that at Matan Torah, each of us recognized the greatness of each other.  They perceived the greatness of the tzelem elokim in their brethren.  That is what had united us all back then.  That is why we recite the words, “vehivdilanu min hato’im venasan lanu Toras Emes” when we celebrate Matan Torah.

That is, we perceive the vanities of the world around us, and realize that Torah and connection to HaKadosh Boruch Hu is all there is.

The attraction to drunken alcoholism and the disregard for human life that is reflected by driving drunk, and speeding as well, while in state of drunkenness is the vehivdilanu min hato’im.  The davening, the Tehillim, the reaching out in tefillah of both the Tuesday night and Wednesday night event is reflective of “venasan lanu Tora semes.”

Dovid HaMelech describes us as the Shivtei Kah (Tehillim 115:16), not the tribes of Israel, but the tribes of Hashem. Why this description? It is because Klal Yisroel has an exceptional level emunah and bitachon a unique ability to connect to HaKadosh Boruch Hu, one that we believe always was and remains unparalleled among other nations.

This author recalls that there was one lesson that really spoke to Leal Namdar a”h – one that affected her.  In the shmoneh esreh, we say the words “mechalkel chaim b’chessed – who sustains Life with Chessed.”  There are a number of possible interpretations of this clause.

It could mean that Hashem sustains the world, or life, through His midah of Chessed.

It could mean that Hashem sustains this world in a manner that reflects Chessed – he could feed us through stale, tasteless food, but rather He does so with remarkable delicacies.

Or, it could be that it is understood like the explanation of my Rebbe’s Mashgiach, Rav Chatzkel Levenstein zt”l, while he was in Shanghai, China with the Mirrer Yeshiva.  What is the food, the petrol or gasoline that sustains us?  It is the ability to do Chessed. It is valuing Chessed and its performance that is our food.

In other words, in every shmoneh esreh that is recited the meanings of those three words are understood to mean that life, our life is sustained and powered by – Chessed.  It is who we are.

This too, Chessed, is reflective of the unity of our community.  This community, and in fact, these two shuls are the sites, the venues, where our community, all spectrums of it unite – not just in tragedy, but also in smachosm and in Mitzvos.  May we be zoche to continue in our achdus.  May we be inspired to be united in other ways and remove any pirud – disunity in our communities.

These tragedies are happening not just here, they are happening in Eretz Yisroel where once again, the term vehivdialnu min hato’im comes to mind.  We yearn for a time when these tragic incidents, where the crème de la crème of our people not be killed or stabbed or injured.  The Navi in Zechariah (8:19) does give us hope. If we but love emes and shalom, instructs the Navi,  that Divine Closeness we experienced with the Beis HaMikdash in our midst, the Shechina deep within our midst –  will return. Therefore, it would seem that an essential theme and goal of each of these fasts is to develop our love of both of these ideals, truth and shalom. Particularly around the fast days, it would seem that we should make efforts to extend our hands to those with whom we are currently not at peace, and we shall see sheYibaneh Bais Hamikdash bimheirah beyameinu. Amain.