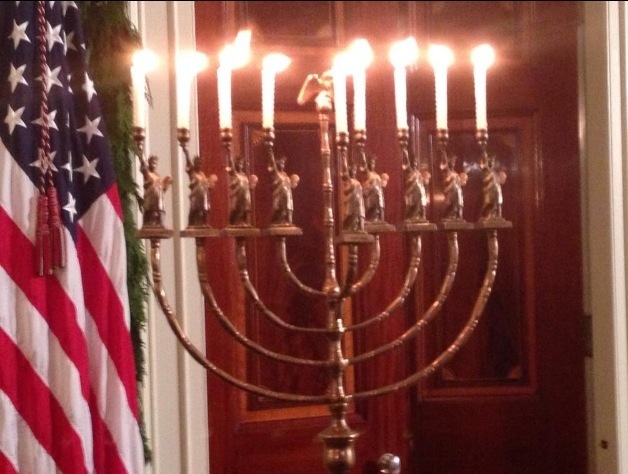 In what started as a tradition by former President George W. Bush, hosting special guests, influential community leaders, Rabbis and other selective dignitaries to celebrate the holiday of Chanukah, had become a unique opportunity for leaders of all communities to celebrate the last day of Chanukah at a get-together in the White House at the invitation of President Barack Obama and First Lady Michelle.

This year’s White House Chanukah celebration was, for the first time, divided into two receptions, one after the other, yet identical, to accommodate the high demand for attendance.

The White House kitchen was koshered Tuesday night in an operation supervised by Rabbi Levi Shemtov of American Friends of Lubavitch and the Chabad Shliach in the capital.

At the first event of the day, Thursday afternoon, President Barack Obama and his wife Michelle greeted the many Jewish supporters and community leaders who gathered from nationwide locations, expressing his gratitude for the continued support of the Jewish community throughout his presidency and most importantly lauding the strong bond between the Jewish people and the United States.

The White House used a special menorah, designed by a Holocaust survivor, in which each candle holder was a small replica of the Statue of Liberty. The Menorah was lit by the wife and daughters of a US soldier deployed in Afghanistan. Standing by, President Obama lifted one of the girls to light the candle.

“I was deeply humbled by the invitation and was honored to have the privilege of enjoying this historic event at the White House,” Rabbi Friedman told YWN. “I am extremely grateful that we have a receptive ear in the Oval Office as President Obama continues to pay close attention to the needs of the Jewish community.”