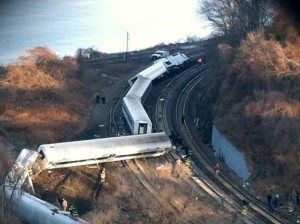 New York City’s Metro-North Railroad is already getting hit with multimillion-dollar civil claims over a deadly commuter train derailment, but legal experts say prosecutors will face tough choices when deciding whether to bring criminal charges against the engineer.

Train operator William Rockefeller told investigators he fell into a daze at the controls before Sunday’s wreck.

It can be tough to prosecute drivers who fall asleep at the wheel unless there are extra factors in play, like drug use or brazen disregard for passenger safety.

Bronx District Attorney Robert Johnson, who would handle any prosecution, has declined to comment publicly.