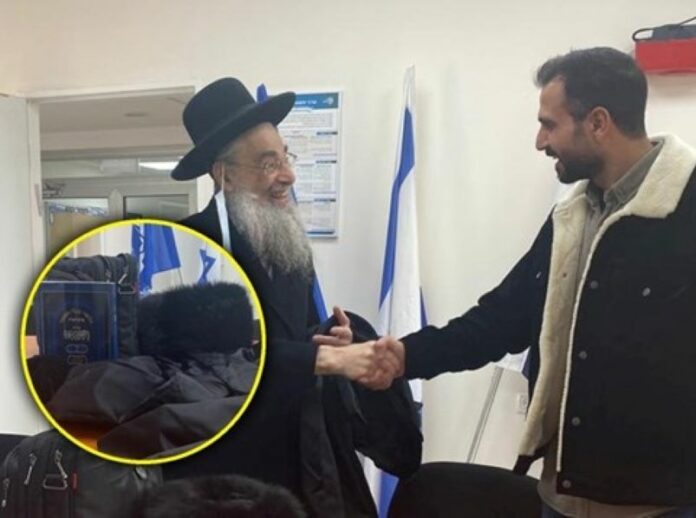 HaRav Itche Rosmarin, the legendary Ba’al Tokea of Gerrer, was recently summoned to the offices of Israel Police’s Central Unit in Jerusalem, where to his great happiness, he was presented with valuable items he has lost three years prior.

The story began three years ago when HaRav Rosmarin, originally from the US, left a number of valuable items in a cab that drove him home after his grandson’s wedding, including a kapota, a shtreimel, and a Gemara. All his efforts to locate the cab driver and retrieve his possessions were unsuccessful, a source of great distress to him as the kapota, which he had received dozens of years ago from the Lev Simcha, was not only expensive but had great sentimental value. He had especially brought the kapota to the wedding for his grandson to wear under the chuppah.

So where did the police find the kapota? In the course of investigative and operative activities against suspects for Hamas-related terror incitement, possession of weapons, and involvement in violent riots, they searched one of the suspect’s homes in the East Jerusalem neighborhood of Issawiya. There, they discovered a kippah, a Gemara (Masechtas Chulin), a shtreimel, a kapata, and additional items.

Fortunately, as part of his efforts to locate the items, Rav Rosmarin had filed a police report, and the police successfully put all the clues together and contacted him.

Rav Rosmarin and his wife came to the station, where they were reunited with their possessions and expressed their heartfelt appreciation to the police.