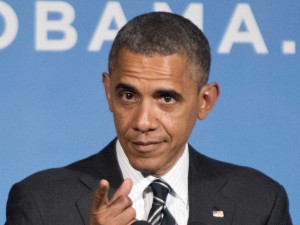 Americans’ perceptions of President Barack Obama are falling not only on his handling of the economy and other big issues, but also on more personal qualities such as honesty, a poll finds.

A clear majority of adults, 56 percent, say “honest” does not describe Obama well, according to The Associated Press-GfK poll. That’s worse than his 52 percent rating in an October poll.

The latest poll finds 41 percent think the president is decisive, 44 percent see him as strong and 45 percent call him inspiring.

Republicans pounded Obama this fall for repeatedly saying Americans could keep their existing insurance plans under his new health law. That turned out to be untrue in many cases, and Republicans said it proved Obama can’t be trusted.

As for Obama’s overall approval rating, 58 percent disapprove of the job he’s doing, while 42 percent approve. Disapproval of his handling of several specific issues hovers around 60 percent. They include the economy, federal budget deficit and unemployment.

The president’s weak ratings on these character and competency questions could make it harder for him to nudge a sharply divided Congress toward his goals in his final three years in office.

Americans hold Congress is even lower regard. Congressional approval stands at 13 percent, with 86 percent of adults disapproving. Nearly two-thirds say they would like to see their House member replaced next November, the AP-GfK poll finds.

Even though people are feeling somewhat better about the economy and their personal finances, elected officials in Washington aren’t benefiting from the improved mood.

Obama isn’t running for office again. But all 435 House seats and one-third of the Senate’s 100 seats are on the ballot next year.

The low opinions of Congress don’t necessarily signal major power shifts after that election in the Republican-controlled House and Democratic-run Senate.

House Democrats need to gain at least 17 net seats to claim the majority. But many House districts are so solidly liberal or conservative that incumbents can withstand notable drops in popularity and keep their seats.

On one major issue, most Americans continue to favor providing a path to legal status for millions of immigrants living in the U.S. illegally. Fifty-five percent support it, and 43 percent oppose.

The Senate passed a major immigration bill that would provide a legalization path, which Obama supports. But the House has sidelined the issue so far.

Despite the relatively low opinions of Congress and Obama, the national mood is not quite as bleak as it was in October, when partisan stalemate led to a 16-day partial government shutdown and fears of a possible default.

More Americans now say things are heading in the right direction and the economy is improving, the AP-GfK poll found. But those figures are still fairly anemic, below 40 percent.

Democrats have a slim edge as the party Americans would prefer to control Congress, 39 percent to 33 percent. But a sizable 27 percent say it doesn’t matter who’s in charge.

In a sign of public discontent, 62 percent of registered voters say they’d like someone new to win their congressional district next year, while 37 percent support their incumbent’s re-election. That’s a worrisome trend for incumbents’ campaigns.

Four years ago, polls by NBC News/Wall Street Journal and Marist found fewer than half of Americans wanting their own representative ousted.

When elected officials are dropped from the equation, the public mood brightens a bit, the new poll found. The share of adults saying things in the country are heading in the right direction has climbed 12 percentage points since the government shutdown, to 34 percent. Still, almost twice as many, 66 percent, say things are heading the wrong way.

Independents, who can be crucial in general elections when persuaded to vote, share the modestly growing optimism. Whereas 82 percent of independents said the country was headed in the wrong direction in October, the number now is 69 percent.

More adults now say they expect improvement in their household’s financial standing in the coming year: 30 percent, compared with 24 percent in October. More also say it’s a good time to make major purchases, although the number is an unimpressive 19 percent.

Megan Barnes of Columbia, Md., is among those who see an uptick in their own finances but give scant credit to politicians.

“I think the economy seems to be fairly stable, and for my family in the future, it’s going to be OK,” said Barnes, 32, a stay-at-home mom married to a software engineer.

She said she strongly disapproves of Congress and leans toward disapproval of Obama.

In Congress, Barnes said, “I’d like to see people put their jobs on the line to get things done, and not worry about the next election.” A moderate Republican, Barnes said she would like to see someone replace her member of the House, Democrat Rep. Elijah Cummings.

As for Obama, she said it’s troubling that he seemed to know little about the National Security Agency’s spying on international allies or the serious problems in the rollout of his health law.

“He also doesn’t seem to really work with the Congress a lot, even with his own party, to build consensus and get things done,” Barnes said.

The AP-GfK Poll was conducted Dec. 5-9 using KnowledgePanel, GfK’s probability-based online panel. It involved online interviews with 1,367 adults. The survey has a margin of sampling error of plus or minus 3.5 percentage points for all respondents.

Using probability sampling methods, KnowledgePanel is designed to be representative of the U.S. population. Respondents to the survey were first selected randomly using phone or mail survey methods and were later interviewed for this survey online. People selected for KnowledgePanel who didn’t otherwise have access to the Internet were provided with the ability to access the Internet at no cost to them.