Police arrived by the thousands in their finest dress blues on Friday, as a light snow drifted under an overcast sky, to honor a fallen brother — during the first of two funerals that again brought sorrow to the New York Police Department.

Later, the bag pipes played outside St. Patrick’s Cathedral, as Officer Jason Rivera was given a final salute along Fifth Avenue.

A week ago, Rivera and a partner, Officer Wilbert Mora, were fatally wounded Jan. 21 by a gunman who ambushed them in a hallway as they responded to a family dispute. Mora’s funeral is being held next week, also at St. Patrick’s.

Roman Catholic Cardinal Timothy Dolan presided over Rivera’s service, held in Spanish and English in recognition of his Dominican heritage. Many of the city’s top leaders were attending, as uniformed officers filled the pews. 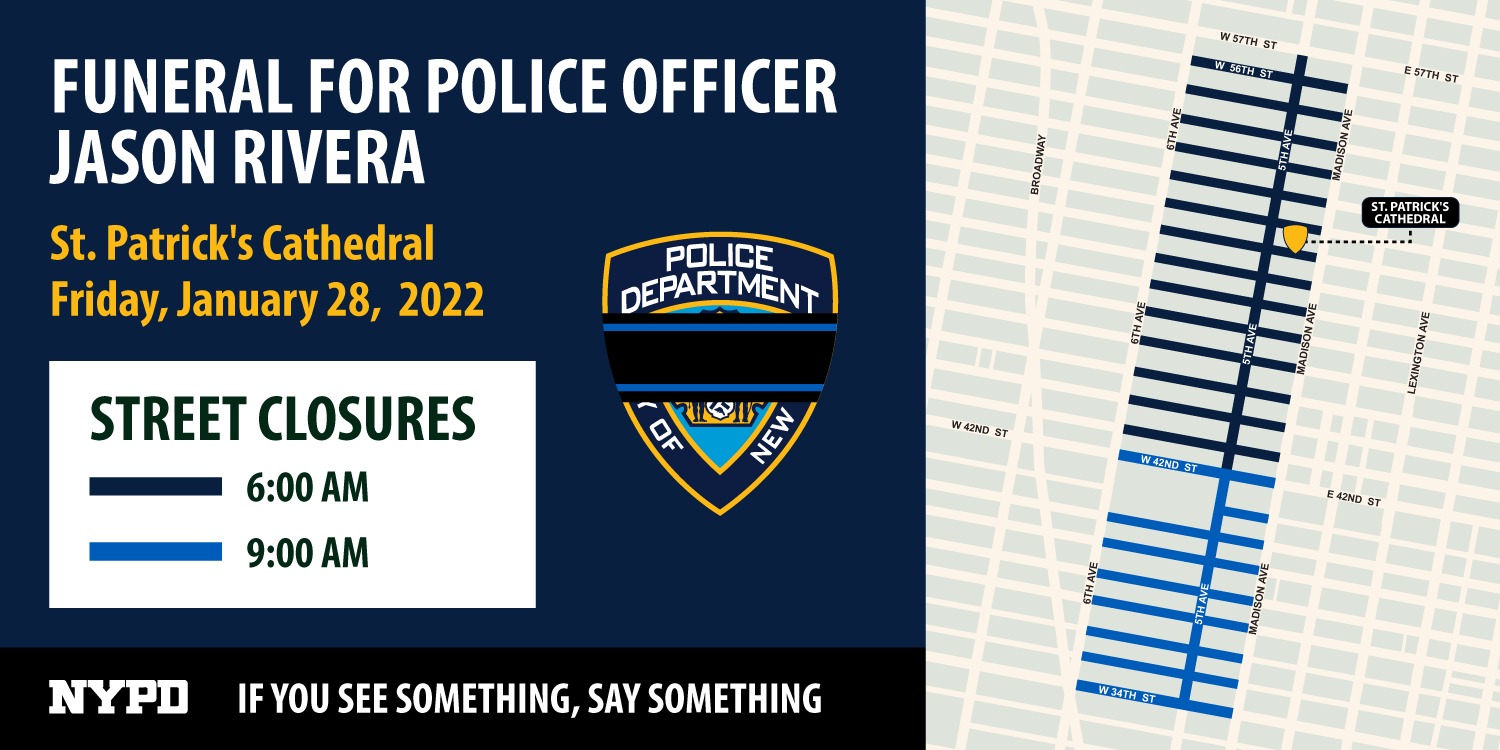 New York Gov. Kathy Hochul said flags at state buildings would fly at half-staff from sunrise the day of Rivera’s funeral until sunset the day of Mora’s funeral on Wednesday.

The officers came from near and far to honor Rivera, who, at age 22, was recently married and barely into his second year of service on the force.

“It doesn’t really matter what uniform we wear,” said Master Police Officer Tammy Russel. “We’re from Fairfax County, Virginia, but we’re here in New York City. These are all our brothers and sisters. … Sadness all around.”

Over the years, more than 500 New York police officers have died in gunfire, according to the Officer Down Memorial Page.

“It’s an emotional time,” said retired NYPD Officer Sean Flanagan, who played the bagpipes outside the cathedral. “We honor our own, we take care of our own.”

On Thursday, ordinary citizens joined thousands of uniformed officers at the cathedral for Rivera’s wake.

Patty Marsibilio, 61, traveled an hour by subway from the Bronx to pay her respects and pray for the safety of other New York City police officers.

“This is something that was so terrible,” she said. “He was 22 years old, married not even four months.”

Throughout the week, friends and fellow police officers remembered Rivera and Mora as caring and dedicated. Both grew up in the city’s ethnic enclaves and, by many accounts, had hoped to help the department build bridges with the community.

The gunman, who was shot by a third officer, died earlier in the week. Authorities are still investigating why he fired at the officers.

Before Friday, the last NYPD officer killed in the line of duty was Anastasios Tsakos, who was struck by a suspected drunken driver in May 2021 while assisting officers at the scene of an earlier crash on a Queens highway.

The last NYPD officer fatally shot in the line of duty, Brian Mulkeen, was hit by friendly fire while struggling with an armed man after chasing and shooting at him in the Bronx in September 2019.

In 2015, Officer Randolph Holder was shot and killed by a man riding a stolen bicycle in Manhattan and Officer Brian Moore died after he was shot by a man in Queens.

The year before, Officers Wenjian Liu and Rafael Ramos were fatally shot by a man who ambushed them as they sat in their patrol car in Brooklyn.